Wavemaker Lives Up To Its Name, Enters Crypto Market With Coinbase

GroupM's Wavemaker unit is entering the rocky waters of the cryptocurrency market as the media agency-of-record for Coinbase, a publicly-traded exchange for buying and selling cryptocurrencies such as Bitcoin.

The agency said it won the account following an "internally-led agency selection process that challenged agencies to raise awareness of Coinbase, scale performance by broadening reach, and align the brand with popular culture as it becomes the first pure-play crypto trading company to list on a U.S. exchange. There was no incumbent.

The company, founded in 2012, recently issued an initial public offering to trade its own public shares on Nasdaq under the COIN ticker symbol.

Coinbase shares, which began trading April 14, opened at $381 per share and are currently trading around $239 per share.

As volatile as that might seem, it's considerably less choppy than the erratic nature of the cryptocurrency market it exchanges. Bitcoin, which reached a high of nearly $65,000 in April, currently trade at about $36,685.

Terms of the account's compensation model were not disclosed, but in April, USIM became the first major agency to announce it would accept cryptocurrencies such as Bitcoin for buying media. 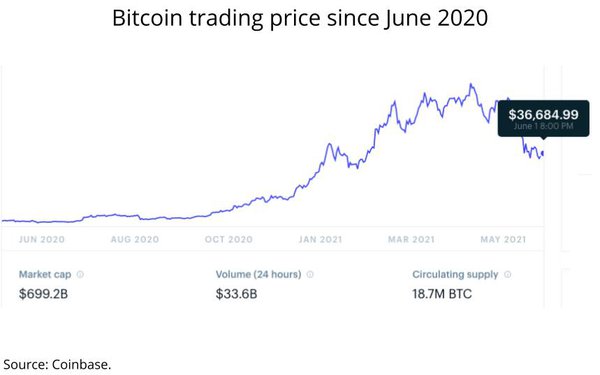