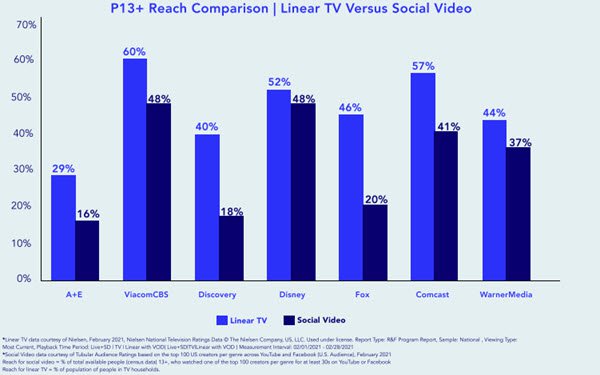 For most traditional linear TV companies, social video generates about 70% as much reach as linear TV — and for Disney, the reach is nearly the same.

The 18-to-34 age segment generates more than half of social video consumption, versus just 10% of linear TV consumption.

Those 55 and older now make up more than 60% of linear TV’s audience, but just 13% of social video’s audience.

Those are some of the points highlighted in a new report by industry analyst Howard Shimmel for the Global Video Measurement Alliance (GVMA), a coalition of media companies, agencies and brands working on new social video measurement standards to compete more effectively with linear for ad dollars.

As part of that push, Tubular Labs, which tracks more than 1 billion views per month through its through its social video measurement and analytics platform, last October introduced audience ratings based on a panel of users, instead of usage volumetrics, that allow social video to be evaluated like linear.

The ratings measure the cross-platform reach and engagement of YouTube and Facebook audiences with deduplicated ratings (unique viewers, minutes watched, 30-second views) for creators, as well as across entire media and brand portfolios, segmented by gender, age and geography.

The report acknowledges that there are some differences in the Tubular Audience Ratings and Nielsen methodologies, but compares data from the two to “provide perspective” on their reach and demographics.

It argues that the facts support the importance of using social video as a complement to reach audiences that linear, with its ongoing declines in overall viewership and younger demographics in particular, no longer reaches. And that this will only become more important as linear’s premium-content ad inventory continues to decline and its CPMs continue to rise.

As major media companies like Disney focus on maximizing content value through subscription streaming services, “It’s looking extremely likely that what will be left of the premium traditional linear TV business will be focused on live news, sports and tentpole events like the Academy Awards,” writes Shimmel, who is a GVMA member. “Most other premium content will be directed to DTC services.”

Genres in which social video’s reach is comparable to linear’s include entertainment and news/politics. There are also multiple genres that are not as prevalent on linear TV but have significant social video reach, including home/DIY, music/dance and food/drink. 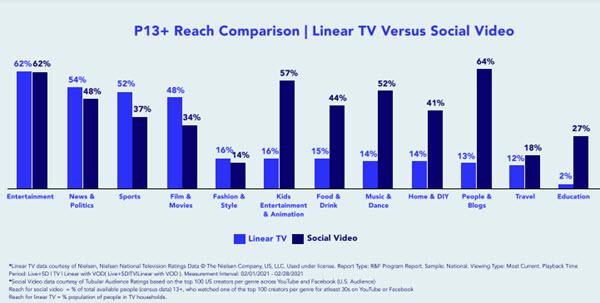 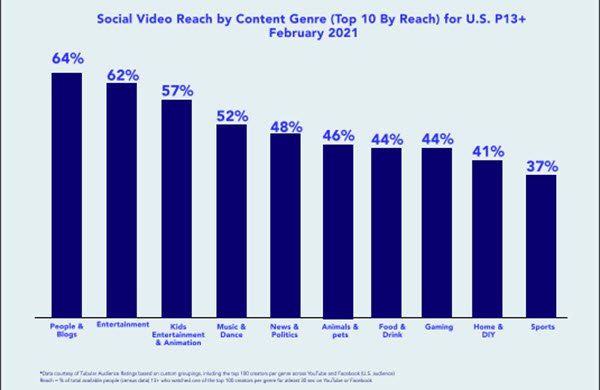 * Engagement with social video is greater among those 18 to 34 than for all others 13 and older.

In short, social video has grown audiences nationally and by genre, attracted younger demographic groups, and established a high rate of engagement with viewers, says the report.

“The challenge is how to use TV and social video in concert with one another” and other media, not making an either/or choice, writes Shimmel.

At the same time, “there are instances, depending upon the target, brand messaging and desired outcome,” where social video “can play a dominant role in an advertiser’s media mix,” he adds.