Merrell's Advice About Everything? #DoItOutdoors 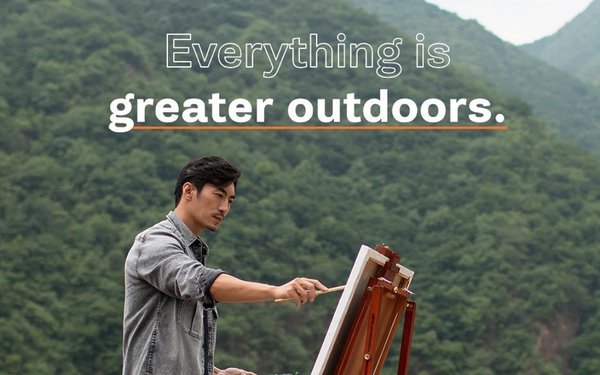 Yoga. Coffee. Movies. Zoom calls. Book clubs. Lunch. Merrell wants to let everyone know that those are just a few of the things that are even better when done outdoors.

Merrell has been celebrating the annual “Great Outdoors” designation since it started back in the 1990s. But this year, it’s making the effort even bigger, with its first-ever national spot in support of the event.

Themed “Everything is Greater Outdoors,” the campaign is based on a #DoItOutdoorsChallenge.

“Even before the pandemic, we were seeing a trend of more people wanting to spend time outdoors,” says Lindsey Lindemulder, brand marketing director for Merrell. “And then throughout this last year, being outside for anything has become such an important source of refuge. It made people feel safe. We want to encourage people to do that even more.”

Words From the Woods, Merrell’s Portland, Maine-based ad agency, created the campaign. The TV spot focuses on a family watching a backyard movie. Digital ads offer simple prompts, like “practice your presentation...outside.” Influencers and ambassadors join in, sharing their TikTok challenges, camping how-tos and recipes for the outdoors.

The new work also offers Merrell a way to keep walking its middle path, toeing a line between pure athletic performance and, well, people who buy hiking boots just to look rugged at the farmers’ market.

Lindemulder tells Marketing Daily that while the company is certainly proud its gear is a favorite for some of the most challenging hikes in the world, “spending any time outdoors is good for the body, mind and spirit. If we’re honest, the outdoor industry can seem like an exclusive club. But really, going outside is just going outside. We make great gear. But we also welcome newcomers.”

That’s why the campaign’s links to partnerships with organizations like Big Brothers Big Sisters, NRPA and Outdoorsy are important, she says.

Merrell’s also using the campaign to get attendance at events at many of its retail partners, including yoga in the park and beer fitness events at outdoor breweries. Merrell is a sponsor of Michelob Ultra’s Sunset Hikes Concert Series, where attendees hike into a concert in the woods.

Merrell is owned by Wolverine Worldwide, which also owns such brands as Keds, Hush Puppies and Saucony. In its most recent quarterly results, Wolverine reported that sales of Merrell shoes surged 25%.