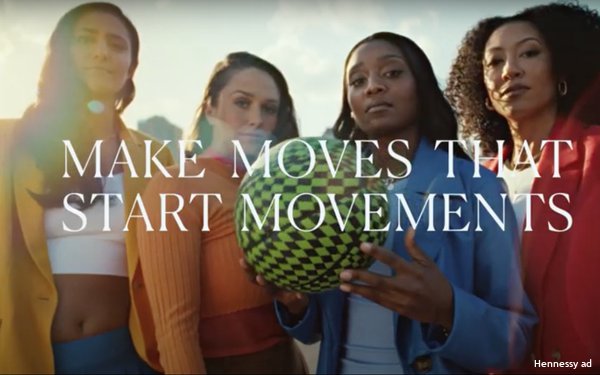 As the nation and sports world reopen after the pandemic, Michelob Ultra celebrates “The Greatest Comeback,” while Hennessy still has “Unfinished Business" -- in separate campaigns launching June 7 during TNT’s coverage of the NBA Playoffs.

Major athletes take center stage in the Michelob Ultra campaign, whose elements include special packaging and a summer-long sweepstakes with a stellar grand prize: two tickets to five of 2022’s biggest sports events, plus private jet transportation and luxury hotel rooms for each.

“We have all been eagerly awaiting the reopening of live attendance at sporting events,” said Ricardo Marques, vice president of marketing, Michelob Ultra. “That’s why, this summer we will celebrate the greatest comeback in the history of sports in epic fashion by giving fans a chance for a once-in-a-life experience.

Appearing in commercials and pictured on Michelob Ultra 24-bottle cases will be the NBA’s Anthony Davis and Jimmy Butler, the WNBA’s Nneka Ogwumike, soccer’s Alex Morgan, golfer Brooks Koepka and tennis’ Serena Williams.  The 24-packs will randomly contain special bottles signed by the athletes. Consumers who find the bottles can upload photos to the MyCooler app through UltraComeback.com for entry into the sweepstakes, with 10 extra entries given to anyone who collects all six bottles.

Prizes will include tickets to 2021 sports events as well as brand merchandise – plus the grand prize of tickets and deluxe travel/accommodations to the 2022 Super Bowl, Miami Open tennis tournament, NBA Finals, golf’s The President’s Cup, and soccer’s FIFA World Cup.

The sweepstakes will run through Sept. 12. Creative agency is draftLine NYC.

In the new ads, dubbed “Make Moves That Start Movements,” Westbrook is shown as creative director of his cause-based fashion line, Honor the Gift; Solomon crafts a project in his LA studio; and Taylor plays with her women’s basketball collective, Hoop York City.

“The NBA fan doesn’t just think about basketball as a game, but instead sees it as a never-stopping cultural force that influences everything from fashion to social justice,” Jasmin Allen, senior vice president, Hennessy U.S., explained to Marketing Daily. “Knowing that, the Make Moves That Start Movements narrative was built to champion the values this audience looks up to and enacts every day in their own pursuits."

The campaign features :15 and :30 spots, and will roll out over broadcast, sports and lifestyle digital media, and on Hennessy social channels. Agencies include Droga5 for creative, Dentsu for media, and BCW Global for PR.

Allen added that Unfinished Business represents “a multiyear, league-wide partnership” that will “include league-specific activations.”

The overall “Unfinished Business” campaign has already provided $5 million in funding to 1,600 businesses.

But, as Allen noted, “There will always be unfinished business – long after the pandemic is over….Our ambition is to engage NBA teams, players, and communities to raise and distribute as much funding as possible to benefit BIPOC small businesses disproportionately impacted by systems of inequality.”