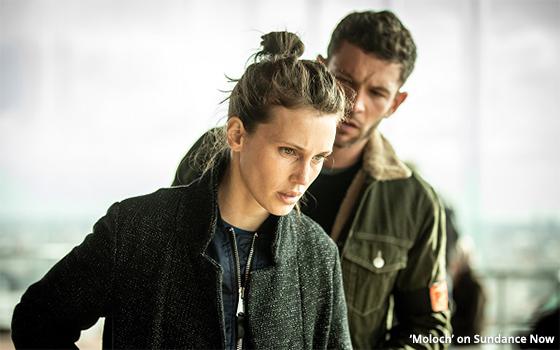 Do any of the purveyors and producers of our visual entertainment media understand the concept of “entertainment” anymore?

That’s the question that arose as I watched a new detective series imported from France and scheduled to start streaming on Sundance Now on Thursday (June 10).

The mystery at the center of the show: Seemingly random people are suddenly combusting spontaneously for no discernible reason. We get to watch two of them go up in flames, and then writhe in agony while burning to death, in the series’ first episode alone. That’s entertainment?

If memory serves, watching people burn was once a form of entertainment for people back in some distant age when ruling authorities publicly burned people at the stake. But that was then and this is now, when we are supposed to have evolved.

While I was previewing the first episode of this show, titled “Moloch,” it occurred to me just how much the idea of “entertainment” has changed in my lifetime.

Maybe it’s because I happened to catch a showing of “The Sunshine Boys” the other day on one of our movie channels. “The Sunshine Boys” was a 1975 movie adaptation of a Neil Simon play about two veteran, vaudeville comics who worked as a comedy team for 40 years but hated each other.

In the movie, they are persuaded, contrary to each of their better judgements, to reunite one last time for a big entertainment special on TV about the history of comedy.

The two stars basically spend the entire movie trading old-school quips and insults of a sort that was not really outmoded in 1975, even if the style of comedy went back many decades.

Even in 1975, comedy on TV consisted, at least in part, of one-hour variety shows whose formats -- including comedy sketches, dance numbers and songs -- were descended from the seltzer-down-your-pants comedy of the vaudeville stage.

This was partly because so many of the aging stars of the vaudeville era were still around appearing on television in the 1960s and ’70s.

I have mentioned this in previous TV blogs, that when I was growing up, I thought all entertainers were old, and that broadly speaking, “entertainment” consisted of ridiculous comedy sketches in which the stars wore crazy wigs and made funny faces.

Perhaps the most beloved variety star of television in those years was Carol Burnett, who could illicit gales of laughter simply by yelling like Tarzan.

Why bring all this up? Because one of the things TV has lost between then and now is its mission to entertain. TV today is oh-so serious -- even our comedies, many of which contain no comedy at all (as has been mentioned here many times).

Even the title of this show called “Moloch” is so obscure that I had to consult Wikipedia for a possible meaning.

If you’re my age, you might be assuming it is the name of a detective who goes a-sleuthing in the show -- like “Mannix” or “Cannon” (never heard of them? Look them up on Wikipedia).

But no one named Moloch comes forth on the show. According to Wikipedia, Moloch is the name of a pagan deity from ancient times to whom children were sacrificed. What this has to do with the spontaneous combustion of random strangers in modern-day France remains a mystery.

I watched only one episode of “Moloch, but the publicity material from Sundance reveals that the word “Moloch” will begin appearing as graffiti on various walls in future episodes.

The task of investigating this mystery goes to a plucky, ambitious journalist (played by Marine Vacht, above photo, foreground) with assistance from a psychiatrist.

The show is in French with English subtitles. It is atmospheric and very competently filmed, but the same can be said for most scripted television shows these days, whether imported or domestic.

By its nature, the story of people burning to death is sad. And in this show, all of the characters are sad too, along with the environments in which they live and work.

Well, if misery loves company, then an audience for “Moloch” is assured.