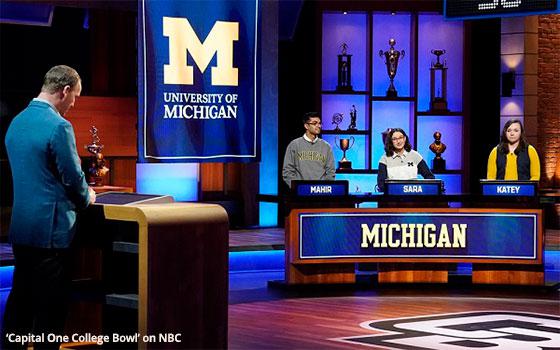 NBC must have really wanted to be in business with the Manning brothers to OK the new “College Bowl” premiering next Tuesday in prime time at 10 p.m. Eastern.

The Manning brothers here are Eli Manning, Peyton Manning and Cooper Manning -- the first two being the former NFL quarterbacks and the third one their older brother, whose football career ended when he quit the sport in college (the University of Mississippi) following a diagnosis of spinal stenosis.

All three brothers are listed as executive producers of this new “College Bowl,” which is officially titled “Capital One College Bowl,” apparently because Capital One paid to be included in the show’s title -- in the manner of college football bowl games.

Eli Manning is not seen on the show, but the other two are. Peyton is the show’s host who asks the questions, while Cooper plays the thankless and wholly unnecessary role of sidekick or stooge.

At various points in the show, and for no apparent reason, host Peyton will suddenly ask Cooper what he thinks about a question, answer or subject that we have just heard. Cooper has evidently been directed to “play dumb,” so he gives a stupid answer like he’s Gracie Allen.

Yes, I just made a reference to Gracie Allen in this TV Blog published in 2021, for the simple reason that I could not come up with any other comic personality known for playing “dumb” any more recently than she. That’s how stale the act is, and yet, this is what they came up with for Cooper Manning.

I doubt the original “College Bowl” had an in-house stooge positioned to provide comic relief, but if I am wrong, experts on the subject of that old show are welcome to enlighten me.

My own memories were of a quiz show that was decidedly serious. It was a staple of TV up until about 1970, after which it was revived in various versions and guises several times, including this new one.

If memory serves, the original was often seen on weekend afternoons, where it served as an academic, brainy counterpart to the college football games also seen on weekends.

The fact that NBC is bringing it to prime time -- and at the late prime-time hour of 10-11 Eastern -- likely represents the most prominent time period this show has ever had.

At the same time, it is an odd choice for the third hour of prime time, a time slot in which scripted dramas have long held sway.

A more sensible time period for this G-rated quiz show would have been 8 p.m. -- leading off the prime-time lineup on Tuesday night with a show everyone in the family can watch together. It is difficult to imagine achieving the same thing at 10 p.m.

In addition, if I am an NBC affiliate, I might also be wondering how this Manning-family quiz show is supposed to benefit my late newscast as a lead-in.

In the premiere episode of “Capital One College Bowl” that the TV Blog previewed this week, two competitions were seen featuring three-member, underclassmen teams from four colleges -- Auburn vs. Alabama and Michigan vs. Minnesota.

To the show’s credit, the level of questions maintained a high standard of intelligence -- which is another reason why the presence of Cooper Manning the stooge is so incongruous.

At no point in this episode of “Capital One College Bowl” did Peyton ask any of the teams, “What’s in your wallet?”