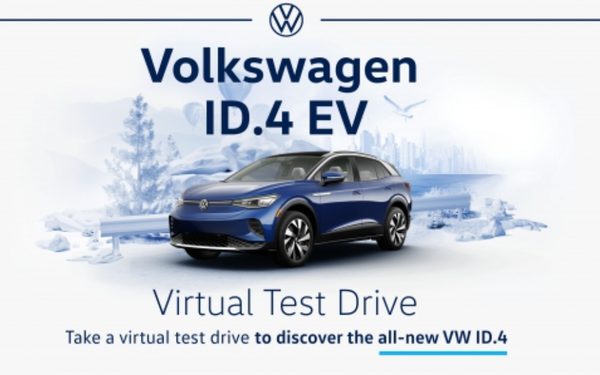 Volkswagen of America and Pinterest are launching a virtual test drive experience through the social media platform.

Delivering a full 360-degree view of the VW ID.4, an electric SUV, the campaign is a first-to-market for Pinterest. Starting today, Pinterest users can access the ID.4 test drive experience for free, directly in the Pinterest app.

Visitors can tap the “See More” prompt at the bottom of the Pin to be taken to an interactive view.

Building on the “Before it can change the world, it has to change yours” messaging, the integration with Pinterest gives the automaker a new way to educate consumers, says Kimberley Gardiner, senior vice president, Volkswagen brand marketing.

The experience “allows us to educate potential customers on how functional, fun and within reach our new EV is," Gardiner says in a release. Pinterest, "which many users visit for both shopping information and inspiration," allows the company "to reach consumers in a whole new way.”

Before implementation, 8 million-plus “Pinners” are already engaging with automotive content and one in three users of the platform have expressed inspiration to shop for a car they weren’t originally considering for purchase.

Previous Pinterest research has also shown that Pinners are 28% more likely than non-Pinners to buy a new vehicle within the first 90 days of a release, while they're also 31% more likely to buy a new SUV model after a new release, according to SocialMediaToday.

The virtual test drive adds a new dimension to shopping on Pinterest, taking the best of IRL shopping and bringing it online, says Andy Holton, global head of creative strategy at Pinterest.

Volkswagen plans to bring at least one new all-electric model to market globally every year. The automaker and Electrify America recently announced an agreement providing unlimited charging plan for owners of the ID.4. VW expects half of its sales to be EVs by 2030.