TTD: Cord-Cutters Set To Exceed Cable Users, 92% Of Advertisers Say CTV Is As Effective As Linear

Cordless consumers are on track to exceed cable viewers within the next year, according to a survey of 4,000 U.S. adults conducted by YouGov for The Trade Desk’s latest “Future of TV” report.

The report also includes insights on advertisers’ views on streaming versus linear, based on a survey of 150 advertisers conducted by Advertiser Perceptions.

The consumer survey indicates that the shift to CTV is solidifying.

Nearly half (47%) of consumers said they’re already cordless, and 44% of those who currently have cable said they plan to drop or cut back cable service in the coming year.

Half (49%) of all viewers said they’re watching more TV since the pandemic began, and 80% of the 18-to-34 segment stream at least an hour of content through AVODs or vMVPDs per week.

The scarcity of live sports on linear during the pandemic was one key contributor to the shift to streaming, the research confirms.

Just 19% of TV viewers report returning to their pre-pandemic sports viewing habits. Further, among the 57% who watch sports at least once a week, 44% report using primary sources other than linear TV for sports. That increased to 65% among the young-adult sports viewer segment (18 to 34). 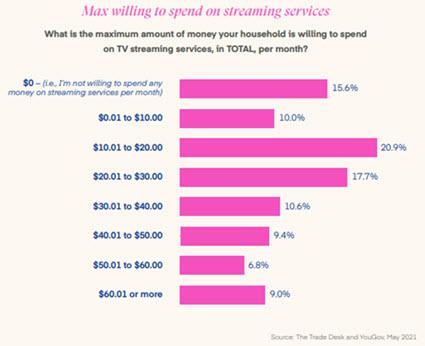 “We’re entering a new TV normal, where new streaming viewing models sit side by side with traditional TV formats,” sums up Tim Sims, chief revenue officer of The Trade Desk. That allows advertisers to achieve incremental reach through CTV while also leveraging data-driven targeting in a way that’s still not possible through linear, he notes.

Advertisers: CTV As Effective As Linear

Meanwhile, 92% of the 150 advertisers surveyed said that CTV is performs as well or better than linear in achieving KPIs, compared to just 8% saying that it’s not as effective.

Three quarters (74%) said that buying CTV ads in conjunction with live sports events can be more cost-effective and impactful than classic sports sponsorships.

In fact, more said they’re combining linear and CTV for major sports events rather than using linear or CTV alone: 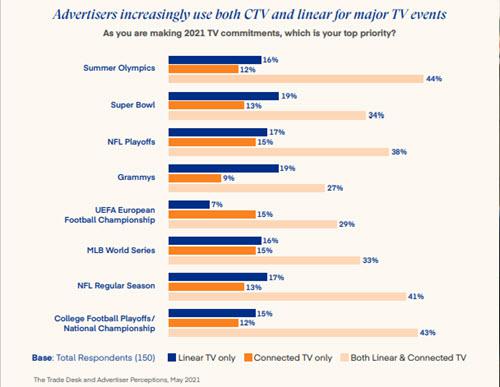 Nearly three quarters (71%) said they planned to maintain or reduce their overall upfront TV investments this year, and even among linear TV ad buyers, 40% said they were seeking fewer upfront commitments for their brands.

But in part because of more focus on measurable outcomes (cited by 38%), nearly half (45%) reported that they’re increasing their CTV budgets compared with last year.

In addition, 91% of those who’ve shifted some budget money to CTV said they’ll maintain those shifts, or increase investments in CTV, going forward.

Half of those surveyed said they’re taking steps to ensure that their teams are fluent in both linear and CTV ad-buying approaches rather than hiring new teams.

YouGov’s consumer online survey, conducted between April 27 and May 5, had a sample of 4,019, weighted to be representative of all U.S. adults (ages 18 and older).

Advertiser Perceptions surveyed 150 TV advertising planning and buying decision-makers with annual TV ad budgets above $5 million between April 22 and May 5.