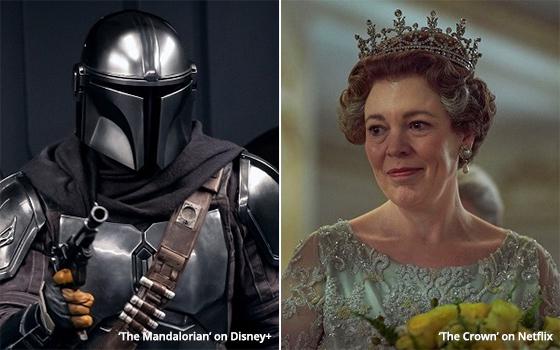 In the annual contest between big media content companies to see which one receives the most Emmy nominations, victory this year goes to the companies that boast the most Emmy-nominated platforms.

In this year’s nominations announced Tuesday by the Academy of Television Arts & Sciences, Walt Disney Co. led all companies, with 146 total nominations spread unevenly among six of its owned platforms.

Second place went to WarnerMedia (which is set to join forces with Discovery next) with 138 total nominations spread even more unevenly among four of its platforms.

HBO/HBO Max’s nomination tally alone was enough to best the total this year for Netflix, which came in third place in the nomination sweepstakes with 129.

Unlike Disney and WarnerMedia, Netflix is a standalone streamer with no other platforms. Netflix did have one of the year’s most-nominated series, however -- “The Crown” (starring Olivia Colman, pictured above), with 24 nominations.

But “The Crown” shared the top spot on the list of most-nominated shows with “The Mandalorian” (also pictured above), which accounted for 24 of the 71 nominations received for Disney+, the Disney-owned streaming service.

Disney+ was the most-nominated of the six Disney platforms that received nominations. The others were Hulu (25), ABC (23), FX Networks (16), National Geographic (10) and Freeform (1).

The Hulu, FX and NatGeo nominations help illustrate how a media company can pile up Emmy nominations after absorbing other companies.

Once upon a time, for example, Hulu was a standalone company. Now its Emmy-nominated content -- led this year by “The Handmaid’s Tale” with 21 nominations -- is part of the Disney family.

Two of the other big players in the streaming arena -- NBC Universal and ViacomCBS -- lagged far behind Disney, WarnerMedia and Netflix in the annual Emmy nomination contest.

NBCU had 56 total nominations -- 46 for NBC (including 21 for “Saturday Night Live”), eight for Bravo and just two for its Peacock streaming service.

As in recent past years, this summer’s Emmy nominations help drive home the point that the legacy broadcast networks are but bit players in the industry they once dominated -- at least when it comes to Emmy Award nominations.

This year’s 73rd annual Emmy Awards will be seen Sept. 19 on CBS, hosted by Cedric the Entertainer.