Given that Samsung Ads is in the business of selling advertising across hundreds of millions of Samsung smart-TV, mobile and desktop devices, it’s hardly surprising to find the company making a case for increasing budget allocations for ad-supported video-on-demand.

Keeping that self-interest context in mind, the study is intriguing and worth reviewing, as advertisers grapple with the challenge of efficiently reaching target audiences within a now-bifurcated linear/streaming viewer universe.

Indeed, Samsung says its study supports the premise that the pandemic-driven acceleration of consumers’ embrace of streaming — and the need to customize media strategy to address the distinctive behavior of different audience segments — demands that advertisers engage in a “rebalancing act.” Meaning reevaluating their balance of linear TV and ad-supported streaming.

Specifically, based on its analysis, the company argues that TV advertisers should generally be allocating about 40% of media budgets to ad-supported streaming to eliminate overexposure to linear-only homes and achieve optimal advertising parity in homes that stream.

As background, Samsung points out that linear-only homes (those having no streaming-enabled smart TV or other internet-connected device) have just 7% penetration within the age 18-to-49 U.S. TV universe, and watch 2.6 hours of linear content per day, on average, per Nielsen NPOWER data.

In contrast, the growing number of TV-connected device homes — renamed “streaming-enabled homes” by Samsung — have 93% A18-49 penetration and watch just 1.2 hours of linear content per day.

For its study, Samsung used ACR-based smart-TV data on user behavior, and licensed third-party data from Nielsen and MediaRadar, to create a model to measure the GRP delivery of network and cable TV schedules against linear-only and streaming-enabled audiences.

It then ran various scenarios for Q3 2021 TV buys to find the point at which ad-reach parity between the two groups can be achieved.

The experiment was repeated across different product categories, demographic targets, and genre mixes, with substantially similar results, according to Samsung.

“Samsung Ads has observed that linear campaigns miss 81% of the ‘mostly streaming’ TVs when compared to ‘mostly linear’ TVs,” says the presentation. “For mostly streaming TVs in the Samsung smart TV ecosystem, the only effective means of media delivery is through AVOD.”

Looking at automotive, CPG and network tune-in advertisers, campaigns with 100% linear budgets resulted in over-delivery of linear-only homes by about an average of about 2X, and under-delivery of streaming-enabled homes at an index of 92.

But when AVOD was upped to 40% of the budget, the streaming-enabled homes’ delivery index reached 99 and 98 respectively—approaching parity. (A delivery index of 100 is considered perfectly weighted.)

Samsung Ads has dubbed this finding “The Rule of 40.”

However, it acknowledges that actual recommended AVOD allocations need to differ based on ad category and target audience.

“For advertisers, where to allocate budget depends on finding a fit aligned to the preferences of the target audience,” the report notes. “Different segments find a balance between linear and streaming at different levels, providing opportunities to optimize the ‘Rule of 40.’”

Here are some optimal allocation findings for several different target audiences, which range from 40% to 50%. For luxury auto intenders, for example, optimal AVOD allocation was found to be 45%. 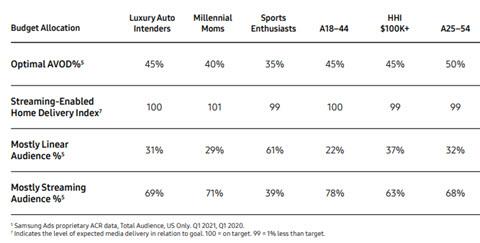 The analysis also points out that, as in linear planning, understanding the AVOD content that’s most likely viewed by the target audience is key to success.

Here are the content genres preferred by various audiences, based on data for the Samsung TV Plus FAST service: 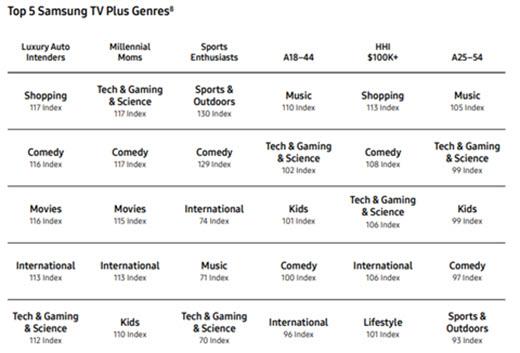 In a direct pitch for Samsung Ads, the presentation also uses an analysis of Q1 data to argue that relying on broadcast and cable apps for AVOD delivery, “while a potentially convenient option, is a recipe for limited success.”

On Samsung smart TVs, broadcast and cable AVOD offerings captured only 14% of the total available ad-supported viewing minutes in Q1 2021, according to the report. When combined with apps that align closely to broadcast and cable with shared ownership and sales arrangements, the two groups comprised 37% of AVOD time spent.

That leaves most AVOD time spent — 63% based on Q1 2021 viewing — among a variety of AVOD options not affiliated with broadcast and cable, including FAST (free ad-supported TV), social video, streaming music, streaming networks and virtual MVPDs.