The U.S. streaming video-on-demand market may have hit an inflection point during this year’s second quarter.

As pandemic restrictions lifted and the last of the major new services (for now) kicked in, new subscription growth slowed sharply and paid (no ads) services’ shares of new and overall subscribers shifted, according to data from Kantar’s Entertainment On Demand service.

The proportion of U.S. households with at least one SVOD in this year’s second quarter was 74.6%, meaning that there were 95.8 million households with subscriptions as of the end of June.

That was up from 70.9% in Q2 2020 — not surprising, given the pandemic lockdown effect. But it was also “consistent” or about flat with Q1 2021, according to EOD. More or less stalled, in other words.

That jibes with this finding: The growth rate for U.S. households signing up for new subscriptions dropped to 3.9% in Q2 2021, from 12.9% in the year-ago second quarter — the lowest growth rate seen since the EOD service launched in first-quarter 2020.

Most of the big SVODs tracked (which accounted for 81% of all new U.S. SVOD sub households in the quarter) saw their shares of those new subs decline. 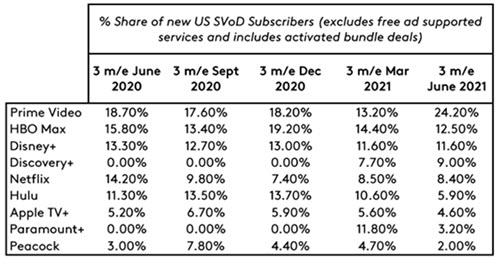 Also bucking the trend was newcomer (launched in January 2021) Discovery+, which achieved an impressive 7.7% of new U.S. SVOD subs in Q1 and managed to up that to 9% in Q2 — capturing one in 10 new subs during the quarter.

The good news for Netflix was that subscribers’ planned cancellation rate was steady in Q2, at 6%, according to EOD.

That reflected intensified competition that led to viewers adding other services and, to a lesser degree, dropping Netflix for lower-priced or free options.

In the new-subscriber race, Netflix was up against Amazon Prime Video’s strong showing, which helped drive Prime Video’s share of total U.S. SVOD households to 58% in Q2 — up three percentage points year-over-year. That put Amazon within 10 points of Netflix.

Behind the Numbers at Amazon, Netflix

Looking at paths to purchase, Amazon is gaining new subscribers primarily through owned touchpoints, including free trials and promotions on Amazon.com, according to EOD. Among the majors, only Apple TV+ has a higher proportion of subscribers on free trials (37%) than Prime Video (31%).

One conclusion: Prime Video is still benefitting from the increase in Amazon Prime subscriptions during the pandemic lockdown, as ecommerce purchasing soared.

In addition, households that have Prime Video on average had 2.8 total SVOD subs in Q2, versus 3.8 on average for the total market — indicating that Prime Video is likely contributing to viewers feeling their needs are satisfied with smaller stacks of services. Smaller stacking averages also translate to more viewer time per service. (Prime Video’s stacking average also rose very little compared to Q2 2020, when it was at 2.6, whereas the market average was at 3.1 a year ago.)

EOD’s satisfaction research shows Prime Video scoring higher than the total market on ease of use (48% versus 44%), amount of original content (44% versus 41%) and value for money (44% versus 41%).

On the flip side, Amazon, which is now significantly pumping up its investment in original content for Prime Video, clearly believes that the streaming service will help it maintain and grow its lucrative Prime memberships, even as consumers resume more physical-store shopping.

“Over the last year, despite new entrants to the market like HBO Max, Discovery+ and Peacock, Amazon’s acquisition has remained strong,” notes EOD. “This reflects the caliber of its original content, such as 'The Boys' and 'The Marvelous Mrs. Maisel.'”

Looking at Netflix, EOD notes some factors beyond market saturation that may be contributing to its challenge on the U.S. new-subscriber front.

Despite its raft of awards, original content may be one factor of late. Whereas Disney+, Hulu and HBO Max took the top spots for most-viewed content during Q2, Netflix came in fourth and fifth, with “The Crown” and “Lucifer,” EOD reports. That was the first time Netflix has missed having a top-three spot for content for at least the past five quarters.

Another indicator of greater competition: Last year, Netflix had the lowest “stacked rate” among major SVODs: Households with Netflix had 2.5 SVODs overall. But Netflix’s average rose to 3 in Q2, which means that Amazon now has a lower stacking average.

In addition, the most common stacks for Netflix subscribers are Netflix, Prime Video and Hulu. “Netflix should be cautious of this competition, as the cost of stacking can quickly add up,” and Netflix subscribers’ top reason (31% citing) for planning to cancel is to save money, EOD notes.

Netflix also has the highest proportion of subscribers who say that someone else pays — 27.4%, compared to 26.3% for Disney+ and 23.1% for Hulu — suggesting a slightly higher level of account sharing.

Earlier in the year, subscribers were concerned that Netflix was preparing a wide-scale crackdown on account sharing. Although co-CEO Reed Hastings has since said that this won’t happen, EOD speculates that the negative publicity may have contributed to some perception damage.

In Q2, Netflix received its lowest NPS score over the last five quarters (37).

Content was a major contributor to Discovery+’s managing to capture 9% of new U.S. SVOD subs in Q2, according to EOD.

The newcomer was actually rated first on satisfaction with the quality of shows.

Discovery+ is also delivering a topnotch onboarding experience for new subscribers. In fact, it’s neck-and-neck with Netflix, the top-rated service on factors relating to ease of sign-up and setting up the service on a device.

In addition, Discovery+ actually beat Netflix on subscribers’ ability to find content they want to watch — although it was slightly behind Disney+, which is ranked highest on this factor.

Discovery+ will need to keep subscribers engaged as more subscribers come to the end of their free trials in the coming months. But if it can continue to push out popular content and boost its share of new subscribers, it could well become a force to watch, points out EOD.