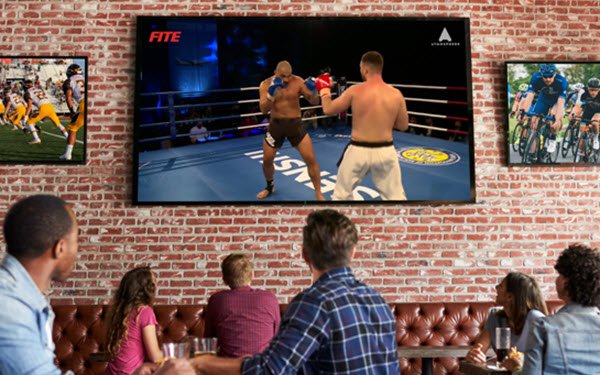 The new channel adds FITE’s boxing, mixed martial arts (MMA) and wrestling content to the platform’s mix of viral video compilations, lifestyle, ambient nature, entertainment and other sports content — 250,000 hours streamed per day across 13,000 restaurants, bars, gyms, hotels, doctors’ offices and other venues across the country, according to Atmosphere.

The FITE platform, which offers live sports and entertainment through streaming video-on-demand packages and pay-per-view events, has 5 million-plus registrants globally.

FITE’s library of combat sports content is “a great complement to our existing programming, and supports our ongoing mission of providing subscribers with the broadest range of high-quality content in a format optimized for out-of-home consumption,” says CEO and co-founder Leo Resig.

While many media hit a wall during the pandemic, Atmosphere managed to double its footprint over the past year, as well as reach profitability in last year’s fourth quarter, according to the company.

The platform claims to reach more than 17 million viewers per month.

Venues receive the screens and hardware free — Atmosphere pitches the businesses the ability to save money by dropping cable or satellite TV subscriptions — and choose which channels they want to show to guests.

Atmosphere has been aggregating content since John Resig and brother Leo launched it in 2019 as a spinoff from Chive Media Group, which owns entertainment website The Chive.

The company — which in April secured $25 million in a Series B funding round from investors including Valor Equity Partners, S3 Ventures and Capstar Capital — is also now venturing into original programming, including a news channel set to launch in Q3. The news content is being overseen by former NBC news exec Michah Grimes and former Newsy CEO Blake Sabatinelli, now Atmosphere’s VP news and COO, respectively.

Atmosphere’s free, ad-supported version includes regular ad breaks during the programming from advertisers such as Jack Daniels and ABInBev. (Venues can also opt for a paid subscription that allows them to screen their own in-house ads, or opt for a paid, ad-free version.)

Media buyers can run ads directly through Atmosphere, or buy programmatically through exchanges.

Ads can be targeted by time periods, venue locations, and venue categories and subcategories.

For instance, a beer brand could target ads to individual bar locations in the evening, or a healthcare brand could target doctor’s offices during weekday mornings and afternoons —specifying the medical providers’ specialties, if desired (dermatologists, dentists and so forth).

With OOH and streaming both in ascendance as advertising channels, this cross between the two may have hit on a winning formula.