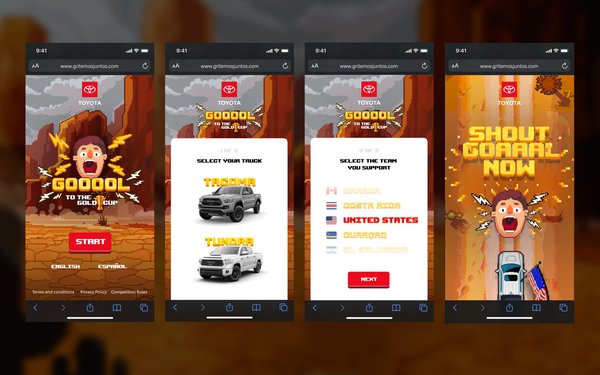 Toyota is launching an interactive mobile game for soccer fans tied to its sponsorship of the Concacaf Gold Cup for a third consecutive year.

Game prizes include the lease of a 2021 Toyota Tacoma or tickets to the final game, which will be Aug. 1 in Las Vegas.

The “Goal to the Gold Cup” game asks players to show their passion for their favorite team by giving their loudest and longest “Goal” scream into their mobile device.

The game will be available online through Toyota’s social channels (@ToyotaLatino) and at gritemosjuntos.com.

The countdown begins: three, two, one – the louder and longer that players shout “Goal,” the farther their vehicle travels on the screen.  All contestants who play and register are automatically entered.

The Gold Cup is the region’s flagship men’s national team competition in which the best national teams from North and Central America and the Caribbean compete to be crowned regional champion.

The 16th  edition of the competition, which features 16 national teams, is being held in 11 stadiums in eight major metropolitan cities across the United States from July 10 to Aug. 1.

Gold Cup match attendees can attend pre-game Fan Zone activities, presented by Toyota. Fans can engage with the “Goal to the Gold Cup” game inside a Tundra at the Toyota area.

Tournament followers will also get a glimpse of the actual Gold Cup Trophy courtesy of Toyota, as it travels to select venues for photo opportunities. The appearances will be announced locally.

Soccer runs deep with Toyota, with sponsorships of a variety of other popular soccer properties including Liga Mexicana, MNT/USMNT, and UEFA Champions League, with in-game units, billboards and other marketing elements including broadcast virtual integrations within Liga Mexicana and MNT.