For Athleta, Visa, SK-II, Biles May Be More Golden Than Ever 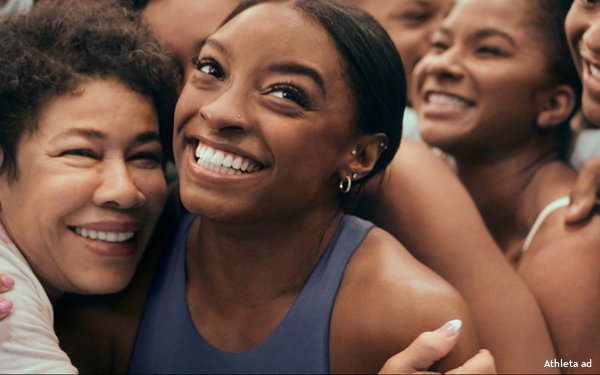 The aftershocks of Simone Biles' decision to withdraw from Olympic competition may still be ricocheting through social media. But judging by brand and influencer reactions, the 24-year-old gymnast proves the zeitgeist around mental health really is changing.

Sponsors quickly rallied around her decision, even as the usual suspects on social media chimed in to chastise Biles.

"We stand by Simone and support her well-being both in and out of competition," Kyle Andrew, chief brand officer for Athleta, says in a statement. "Being the best also means knowing how to take care of yourself. We are inspired by her leadership today and are behind her every step of the way."

On Twitter, the Gap-owned brand simply posted a heart next to a smiling photo from the brand campaign launched earlier this year.

Biles also stars in Visa ads. That company also weighed in fast, tweeting that the "Team Visa family recognizes her incredibly brave decision, which shows how Simone is able to inspire both on and off the mat."

Momentum for athletes moving toward self-care -- even if it means stepping away from competition -- has been building, led by tennis star Naomi Osaka's decision to step away from first the French Open and then Wimbledon.

The hoopla around Biles' withdrawal also tees up nicely with Athleta's announcement today introducing Athleta Well, an "immersive platform designed to build loyalty, engagement and a community of empowered women." (It's also partnering with obé Fitness, a digital fitness platform.)

The company says the move is part of the brand's strategy to evolve from performance athletic wear to a genuine lifestyle, at a time when many women are focusing as intently on stress reduction as they are on physical fitness.

When Biles signed on as an Athleta spokesperson this spring, she said she left Nike to be "a force for change." In her statement, she added that she wanted to "help girls to confidently and passionately take on the world in their athletic endeavors and beyond."

Among the critics of her decision to drop out of both the team and individual competition? Piers Morgan was among the first: "Sorry Simone Biles, but there's nothing heroic or brave about quitting because you're not having 'fun' – you let down your team-mates, your fans and your country."

Twitter, unsurprisingly, lit up in response. But anyone doubting Biles' ability to handle trolls, even on a bad day, might want to check out the brilliant -- and prescient -- animated film made by SK-II, the Japanese beauty brand.  Released in May, "Simone VS Trolls" is set to music from John Legend and watches her as she deflects the trolls and bullies that criticize her looks, her body and her talent.

"Beauty is how you see it. Not how anybody else does," the film concludes. "Destiny is not a matter of chance, it's a choice."

Biles already has a reputation for knowing how to stand up for herself -- and her pals -- on social media. When her ads for Uber Eats drew criticism for also starring "Queer Eye" Jonathan Van Ness, she wasn't having it.

"The world we live in makes me sad," she tweeted. "But I'd do x1000000 more commercials with you just to piss everyone off! The LGBTQIA will always have my support and feel welcome on my socials."