The Salesman's Promise: Life Is Better With A Ronco Product 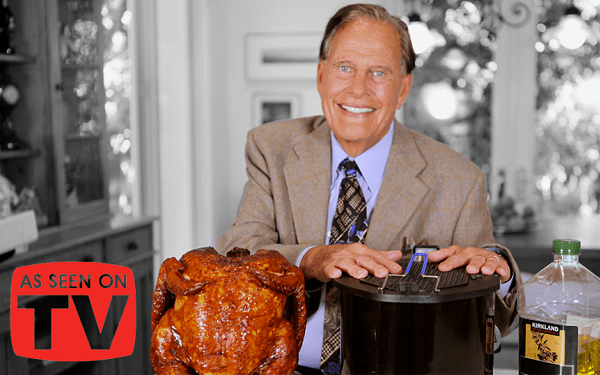 I never bought a Ronco product and to my knowledge, I never knew anybody else who bought one either.

And yet, the assumption is easy to make that Ron Popeil sold thousands, if not millions, of the many products he hawked on TV for 60-plus years. If he had not, he likely would have folded up his tent long ago.

He died last week in Los Angeles at age 86, and was fondly remembered in the news coverage that followed. It is possible that far more people knew of him and his TV commercials and informercials than actually bought his gadgets.

It seems to me that, where the products seen on TV infomercials are concerned, we the public are divided into two camps -- those who are really open (and therefore susceptible) to these pitches and actually buy many of the products that are sold in this way, and those of us who watch infomercials for their advertainment value but are never really persuaded to buy.

Personally, I know far more members of the latter group than the former, of whom I know none (as stated elsewhere above).

As a member of the “advertainment, no-buy” group, I will admit that one of the key questions that has arisen often in my mind over the many years of encountering the kinds of direct-response commercials and infomercials that Ron Popeil helped pioneer was this: Is that thing worth the money, or will it turn out to be a cheap piece of junk that I will then feel bamboozled for having bought?

Even as we mourn Popeil’s death, and remember him as perhaps TV’s most-beloved advertainment superstar, let us also admit that we liked him, at least in part, for his schlock value.

There was something so mesmerizing about the man’s enthusiasm. That was one of the keys to his salesmanship. He made his buyers feel excited about his products because he was excited about them too.

His pitches exuded optimism and offered a promise that his gadgets would make life better. Chopping vegetables would be fun. Watching a chicken roasting in a rotisserie oven would make for mouth-watering entertainment.

For many of us, Ron Popeil was on TV for our entire lives -- chopping hard-boiled eggs in his Chop-O-Matic for “the best egg salad you ever tasted,” and offering us the opportunity to go fishing at any time with the convenient Pocket Fisherman that was so small it could fit in a car’s glove compartment.

The Pocket Fisherman in particular was a great example of Popeil’s knack for invention. It must have occurred to him one day, perhaps when coming across a group of people fishing off of a pier somewhere: What if you made a fishing rod that wasn’t a “rod” at all, but instead, a much shorter object that did the same thing as a fishing rod -- namely, allowed you to drop a hook, line and sinker into some water? From such thoughts are inventions like the Pocket Fisherman made.

Many of the obituaries -- in print, on TV and online -- noted that Ron Popeil and his TV commercials were so ubiquitous over the decades that they were parodied in places such as “Saturday Night Live.”

Those of us who are old enough to remember Dan Aykroyd pureeing a fish in a blender and calling it a “Bass-O-Matic” on “SNL” in 1976 knew better than most what the obits were talking about.