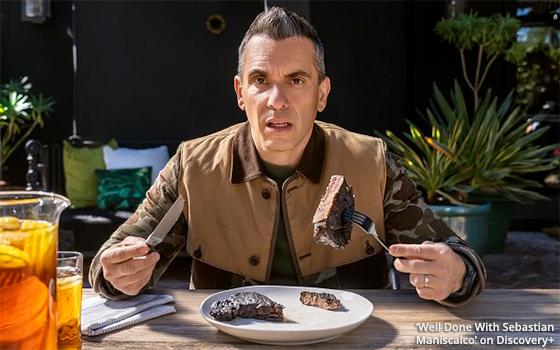 Anyone who has ever experienced the agony of seasickness while trying to enjoy a pleasure cruise might find the premiere episode of comedian Sebastian Maniscalco’s new food show to be rough going.

In this first half-hour installment of the show -- titled “Well Done With Sebastian Maniscalco” and premiering Thursday on Discovery+ -- Sebastian joins two friends for a cruise on a chartered fishing boat out of southern California in pursuit of fish to catch that they will then prepare (i.e., gut and fillet) and cook.

Actually, as things turn out, others will prepare and cook the fish after Sebastian flubs his own attempt at gutting and filleting one of the fish they caught.

One of the crew members cleans the fish, and later, chef Michael Cimarusti of the Michelin-starred restaurant Providence in L.A. prepares it and serves it to Sebastian and a friend.

For that matter, Sebastian did not really participate in the fishing part of this expedition either. Others caught the fish -- Pacific whitefish and another kind of fish called a sculpin -- while Sebastian moaned and writhed elsewhere on the boat as he was overcome with seasickness.

With all due respect to Sebastian Maniscalco, whose stand-up comedy specials on Showtime and Netflix are among the best comedy performances seen on TV in years, this show -- or at the very least, this premiere episode (the only one provided for preview) -- is not his finest hour.

Some might even question why he is even doing a food show because, as he indicates more than once in the show, he is not a “foodie” although he does enjoy food.

Thus, the show has the comedian playing the role of an ordinary guy having various food experiences. There are indications that he himself will do some of the cooking in future episodes.

Along the way, he jokes around with his pals and other people he meets. But for much of the first episode, we only see and hear him in the throes of seasickness, which does not seem to be the best way to start a TV series. Whatever happened to putting one’s best foot forward?

Luckily, Sebastian and his producers spare us from having to witness him becoming violently ill from his nauseous condition -- an example of good taste that is rare in TV shows of this type.

As a result, the premiere of “Well Done With Sebastian Maniscalco” is not likely to make you nauseous like Sebastian on a fishing trip.

And it is entirely possible that after the first episode, when Sebastian forages for his subsequent meals on dry land, this new food show will become easier to digest.