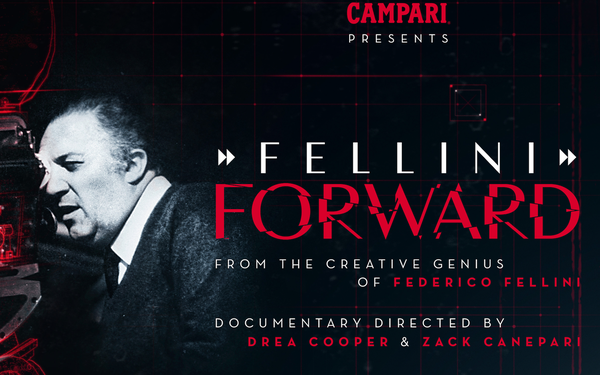 Since launching its “Red Diaries” series of cinematic collaborations in 2017, Italian aperitif Campari has worked with such esteemed Italian directors as Paolo Sorrentino, Stefano Sollima and Matteo Garrone. This year, it’s working with perhaps the best-known Italian director of all time, Federico Fellini -- an impressive feat, since Fellini died in 1993.

The “Fellini Forward Project” consists of two films: an experimental short created through artificial intelligence that follows Fellini “on a journey from the very first spark of his passion as a young man up to his outstanding creations”; and a documentary about how the short film was created. Together, the two films run about 40-45 minutes.

Incidentally, this isn’t the first time Campari has worked with Fellini, as the director shot a 60-second commercial for the brand in 1984 (agency: BRW & Partners, now BRW Filmland).

Campari ties “Red Diaries” to the brand’s “Red Passion” positioning, which it calls an “ethos” of “innovation and creativity” established by its founders back in 1860.

Indeed, Campari does have a rather illustrious history of creative marketing, including celebrated posters dating back a century that have been celebrated in museum exhibitions.

“We hope that the endeavor of ‘Fellini Forward’ will transport people in the past, and in the future, exploring creative genius in brand new ways,” stated Jean Jacques Dubau, head of marketing, Campari Group.

“My Uncle Federico was original in his ways of representing life using dream-like elements,” said Francesca Fabbri Fellini. “Though he took much inspiration from his past, he was always looking ahead. A similar approach was taken for this project.”