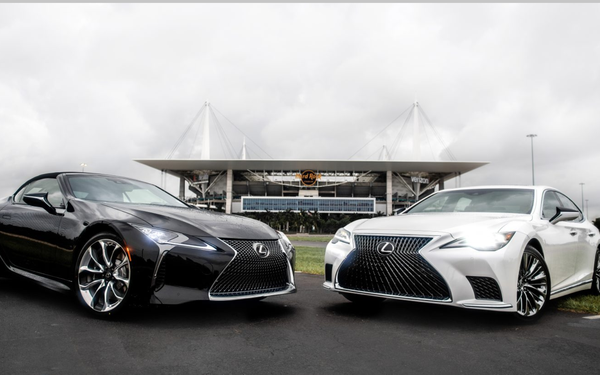 Lexus is the latest automaker to jump on the sports sponsorship bandwagon, striking a multiyear naming rights deal with the Miami Dolphins.

The Toyota luxury division is now the official luxury vehicle of the Miami Dolphins and Hard Rock Stadium.

The partnership also aims to elevate the in-game experience for current and potential Lexus owners in the newly named Lexus North Sideline Club. Located between the 30-yard lines on the north side, the space offers wider, padded seats for fans and an air-conditioned club.

Lexus will also have significant branding presence at all stadium events and naming rights to a custom content series.

Lexus is a “legacy brand,” says Jeremy Walls, senior vice president, chief revenue officer of Miami Dolphins and Hard Rock Stadium. The automaker and the Dolphins have many shared fans, he adds.

The Miami Dolphins have pledged $75 million from the DCC event to fund innovative cancer research at Sylvester Comprehensive Cancer Center, a part of the University of Miami Health System.

To help with the fight against cancer, Lexus North Sideline Club Members will receive one complimentary registration to participate in the next DCC on Feb. 26 courtesy of Lexus.