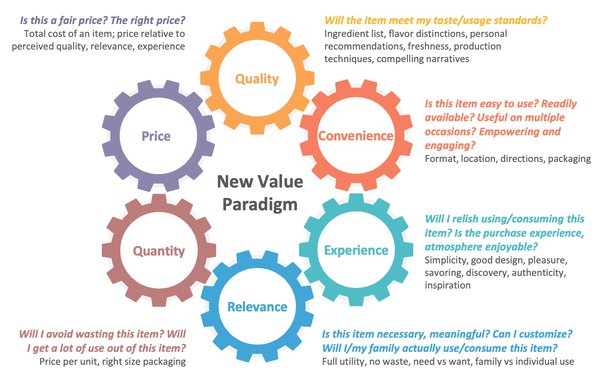 Chart above from The Hartman Group's “Brand Ambition: Food and Beverage Private Brands & Beyond” report.

When it comes to choosing grocery products, attributes are bigger motivators of consumer choices than brand names.

Specifically, consumers are focused on no fewer than six “interlocking facets” (see image above) of what Hartman calls the “new paradigm”: convenience, experience, price, quality, quantity and relevance.

If that sounds complicated, it’s only because it is.

“This whole distinction between private brands and name brands is less meaningful. It’s really what’s inside.”

In this interview, edited for brevity and clarity, Balanko discusses some of the study’s highlights and explains why it’s not just the biggest grocery retailers that can win in the private-label space.

CPG FYI: The report starts with an interesting statistic showing that sales of private-label grocery products were absolutely flat last year in terms of dollars and units. What do you make of that?

Balanko: It is a bit of a conundrum. As sales seem to be leveling off, it could be because consumers are already buying a lot of private label. Maybe this is kind of like where things are going to plateau. We’re certainly not saying that they have plateaued. But it could be an indicator that one is to come. We were left scratching our heads.

CPG FYI: Among respondents who shop where Simple Truth is offered, only 30% recognized it as Kroger’s private brand. What does that tell us?

Balanko: The fact that folks mistake Simple Truth as a name brand—and how 10% to 15% incorrectly identify large, national name brands as private brands—just goes to show that consumers today aren’t really relying on brands to guide their shopping in ways that they might have decades ago.

CPG FYI: Why don’t all grocers specifically identify which brands are theirs?

Balanko: That’s a good question. What our research has shown is that there can be a very strong, positive halo effect from an experience with a retailer, and then the consumer’s regard for their private brand. So if consumers have a good experience shopping at a retailer—they enjoy the store cleanliness, staff knowledge—they are more likely to have a positive perception of that retailer’s brand. You would want to capitalize on that.

CPG FYI: What’s the difference between a branded house and a house of brands?

Balanko: A branded house is where the retailer has a single brand that operates in several categories. A good example would be Trader Joe’s, because it TJ’s everything. Another example is Whole Foods’ 365. That private brand spans many, many categories.

A good example of a house of brands would be Aldi, where there’s many owned brands but it’s pretty much a brand for every category—or very closely adjacent categories.

CPG FYI: Given the complexity of the six interlocking facets mentioned above, is it only the biggest grocery chains that can be successful in private label?

Balanko: No. We would say that the new value paradigm can be tapped into or leveraged by any brand or any retailer. It’s about understanding how value is a combination of both objective characteristics as well as subjective dimensions. Neither one is necessarily more important than the others. but they do work in concert with one another. So I would not say a large company or a small company is better equipped to take advantage of it. It’s whoever learns and understands the paradigm.

CPG FYI: How would you best sum up the report’s findings?

Balanko: I think the biggest take-home of all is that it’s really about attributes. It’s no longer about brand.

As I said, it’s really what’s inside. Where do ingredients come from? How are they processed? What are the health and wellness benefits? What is the culinary distinction?

Consumers are very attribute-focused today. They have all the power in the world at their fingertips via their smart phones to do due diligence and research. And increasingly, they’re going to shop by attribute and less by brand, especially in ecommerce environments where you can filter by attributes.