With all of its phenomenal growth since its November 2019 launch — including more than doubling subscriptions from 57.5 million to 110 million over the past year — Disney+ still has ample room to grow.

Although the SVOD’s domestic growth rate has leveled out in recent months, the growth of Disney+ Hotstar — which expanded from India and Thailand into Malaysia and Thailand in June — has spiraled. That market not only drove most of Disney+'s growth in this most recent quarter, but now accounts for nearly 40% of its total subscriber base, according to Disney.

The streamer has led app store downloads in Thailand and is a leading SVOD in Indonesia and Malaysia.

Unlike some investors, Disney doesn't seem overly concerned that the low subscription prices for Hotstar continue to depress the SVOD’s average monthly revenue per user (ARPU) — although it did raise the U.S. prices for Disney+ and the Disney bundle for the first time in March, each by $1.

In fact, Disney is doubling down on the Hotstar volume push, by introducing an even cheaper mobile-only option in India.

Furthermore, during yesterday’s earnings call, Disney announced that it will launch Disney+ in South Korea, Hong Kong and Taiwan in November, as well as expand the content offered by the service in Japan in October.

“The response toward Disney+ across Asia Pacific has exceeded our expectations,” said Luke Kang, president of The Walt Disney Company Asia Pacific. “We are pleased with the subscriber growth and partnerships forged in markets, and look forward to engaging with more consumers across the region…”

Not counting the coming November additions, Disney+ is already available in 61 countries and 21 languages across North America, Europe, Asia Pacific and Latin America. And in addition to significant growth prospects in many of these markets, there are, of course, as yet untouched regions.

Not really surprising, then, that most analysts, as well as Disney, seem confident that Disney+ can achieve its objective of 230 million to 260 million subscribers by 2024.

A different take on the streamer’s potential — particularly in the U.S. — comes from Diesel Labs, a predictive media analytics company that measures user engagement (posts, comments, tweets etc.) across the major social and video platforms, including Twitter, YouTube, Facebook and Instagram, domestically and globally.

According to this data, it appears that Disney still has a major opportunity to engage consumers who might be converted to subscribers. As of Aug. 3, 80.4% of the U.S. streaming audience had yet to engage on social/video platforms in regard to any of Disney+’s exclusive content. 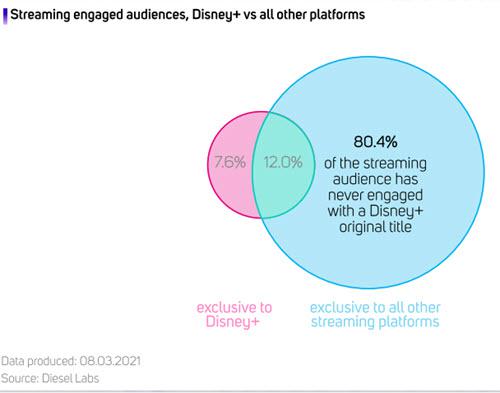 The analysis also sheds light on how Disney’s strategy of debuting some movies on the paid video-on-demand platform Premier Access, in tandem with cinemas, can build engagement (if not, as “Black Widow” star Scarlett Johansson contends, theaters’ box-office sales).

“Mulan,” the first title to be released on Premier Access, grew Disney+’s engaged U.S. audience by 14%, and “Black Widow" increased it by nearly 4%, for example. 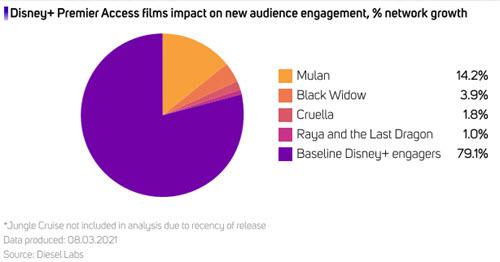 Over 90 days ending on Aug. 3, key titles — including “Black Widow” and Marvel TV shows including “Loki,” “WandaVision” and “The Falcon and the Winter Soldier” — continued to generate new audience engagement for Disney+. 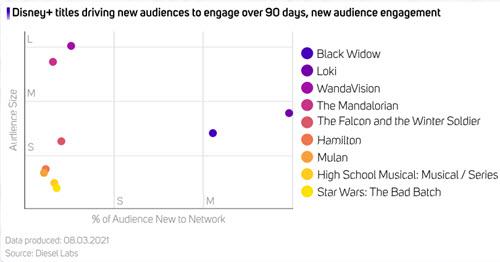 The analysis also highlights the power of franchises: at least a third of “Black Widow”’s engaged audience flowed into the film’s social and video engagement from another piece of Marvel content.