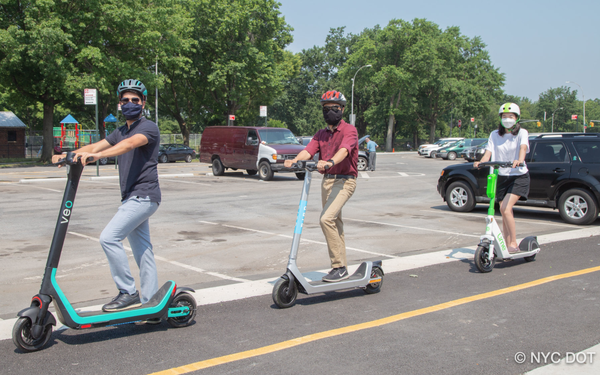 Bird, Lime and Veo have been selected as the operators for an e-scooter pilot in the East Bronx launching this week.

Meanwhile, Spin, the micromobility unit of Ford Motor Co., is working with Google Maps to provide e-scooters and e-bikes as a transportation option on the platform in Spin’s markets.

Google Maps users are now able to see Spin vehicle availability as they plan their journeys in 84 cities, campuses, and towns in Europe and North America.

Users are able to see, in real time, the nearest available Spin e-bike or e-scooter, including how long it will take to walk to the vehicle, as well as the estimated battery range and expected arrival time. Users will then be directed to the Spin app to pay for the vehicle, unlock it and take their ride.

In New York, the city’s Department of Transportation chose Bird, Lime and Veo to provide the 3,000 e-scooters for the first phase of the project northern Bronx neighborhoods. The number of vehicles will increase to as many as 6,000 in the second phase next year, which includes southern neighborhoods such as Throggs Neck and Soundview.

The pilot zones were designed to not overlap with neighborhoods targeted by Citi Bike as part of the bike share company’s current expansion plan. The pilot service area will also be geo-fenced to prevent e-scooters from leaving.

Each company underwent an extensive community engagement process to develop e-scooter parking corrals and educate the public about the pilot, including its safety, equity and accessibility components.

Riders wanting to park in areas with corrals, must return their e-scooter to a corral. In other parts of the zone, riders can park on the sidewalk, against the curb and out of the pedestrian path of travel.

Bird, Lime and Veo have held almost 15 demonstrations and given away dozens of helmets, which are strongly encouraged, although not legally required, for riders.