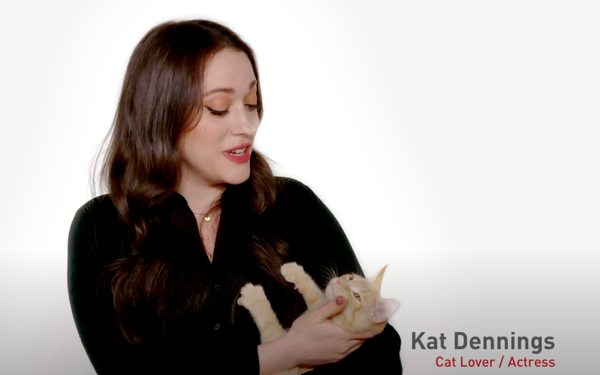 Royal Canin has enlisted actress Kat Dennings and kitten rescuer Hannah Shaw to urge cat owners to take their cat to the veterinarian every year ahead of National Take Your Cat to the Vet Day.

According to a Royal Canin survey, 63% of cat owners incorrectly believe that if their cat is acting “normal” (including playing, eating, drinking, using the litter box,) they don’t need to go to the vet. Pet owners don’t take their cats to the vet until they are in distress – which is a huge problem.

Aug. 22 is National Take Your Cat to the Vet Day and Royal Canin is asking pet owners to pledge to visit the vet for an annual well visit to catch issues when they first start. Cat owners can visit www.royalcanin.com/cathealth to sign the pledge.

Dennings and Shaw (better known as the Kitten Lady) and veterinarian and reality television star Dr. Diarra Blue, teamed up to create a PSA which is running on Royal Canin’s social media accounts. Dennings will also post them to her account, per a spokesperson. B Live produced the PSA and Royal Canin is doing social in-house.

While more than forty-two million U.S. households have at least one cat, totaling more than 90 million cats, few of these cats are receiving proper medical care. In fact, more than half of all cats don’t receive veterinary care on a regular basis – 83% of cats visit the veterinarian before their first birthday, but over 50% don’t return until they become sick or are in pain, according to the pet food manufacturer.

Now in its sixth year, Royal Canin’s annual Take Your Cat to the Vet initiative works to raise awareness about this important issue and help break down the barriers that prevent cats from going to a vet more often.

Slightly more than half (52%) don’t start paying attention to preventative health care measures for their cat until they hit a certain age. Even more startling, 83% of cat owners believe “age doesn’t define my cat” and 73% think their cat acts younger than they truly are.

Cats are “private” animals, so it can be difficult to tell when they’re not feeling well, says Dr. Catherine Lenox, board certified veterinary nutritionist and regulatory veterinary manager at Royal Canin North America.

“While each annual appointment may look similar, your veterinarian is monitoring for different health concerns depending on your cat’s life stage,” Lenox says in a release.

Every kitten season — which corresponds to warm weather months in most regions — thousands of motherless kittens are at risk of death on the streets and in animal shelters. Without a mother to care for them, kittens face impossible odds and can’t survive without specialized care.

The Orphan Kitten Club is dedicated to saving the lives of these tiny felines by rescuing them in its state-of-the-art kitten nursery, ending the cycle through sterilization, and providing care for every kitten possible.