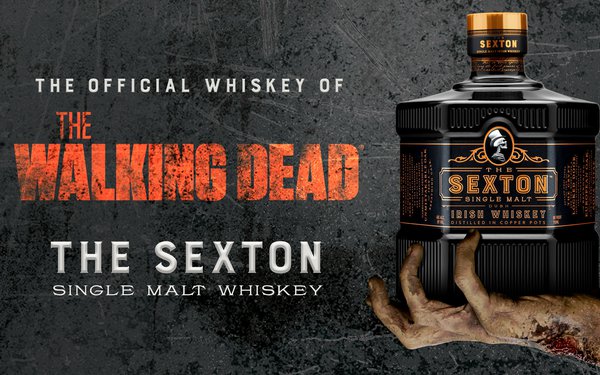 Hearing lots of hype about the 11th and final season of “The Walking Dead”? Here’s more: the AMC series featuring zombies now has a spirit of its own: Proximo Spirits’ The Sexton, a single-malt Irish whiskey.

The Sexton’s naming as “official whiskey” of ‘The Walking Dead” came yesterday, the same day that Moët Hennessy’s Glenmorangie X partnered with “The Hype,” a brand-new competition series set in the world of streetwear fashion.

The Sexton, which Proximo boasts is America’s top-selling Irish malt, will run a 30-second commercial in each of the first eight weekly episodes of “The Walking Dead’s” final season, which begins Aug. 22. The season itself will consist of three eight-episode flights over the next two years.

The spot is from creative agency Dead As We Know It -- whose name has nothing do with the series, nor with its featured zombie characters. In fact, the spot -- directed by RSA Films’ Jake Scott -- is said to provide “an amusing juxtaposition to the dark, dismal realities of life depicted in ‘The Walking Dead’ by reminding viewers to relish the joys of living.”

The Sexton will also air a mix of :30s and :15s across all AMC streaming platforms.

The overall sponsorship agreement, which will extend through late 2022, also includes Sexton purchasers to access extra “Walking Dead” content; merchandise discount codes; and a $64.99 “Walking Dead cocktail kit,” which includes the ingredients to make eight servings of a cocktail called “Live for Today,” and co-branded merchandise.

Beginning early next year, The Sexton also plans to roll out a limited edition, co-branded bottle, recipes and contests.

Glenmorangie X, a new brand, is Moët Hennessy’s latest participant in the HBO Max team-up that launched in June by pairing Moët & Chandon champagne with the film musical “In the Heights” and continued last month with a pairing of Chandon Garden Spritz ( a new combo of brut sparkling wine with orange-bitter liqueur) and “Full Bloom,” a floral competition series.

Each spirits-TV pairing takes over a dedicated Moët Hennessy  - HBO Max web site with an array of features. The site now boasts fare that the partners say will evoke “a celebration of freedom and personal expression - from what you wear to what you drink, and how you entertain.”

Examples include recipes for an “X Lemonade” cocktail and “Bánh Mì Bites” street food, a Spotify playlist, instructions for holding a “paint and sip” class, the ability to purchase Glenmorangie X directly from Drizly, and a sweepstakes awarding a $4,900 gift card from streetwear clothing retailer The Webster.

Moët Hennessy said that future pairings in the year-long partnership will involve such brands as Belvedere, Hennessy and Volcan de mi Tierra.

Prefer bourbon over single-malt whiskeys or wines? You may still be able to snag a bottle of Spirits of the Apocalypse, The Walking Dead Kentucky Straight Bourbon Whiskey, a limited edition distilled a couple of years back by Diageo in partnership with Skybound Entertainment, publisher of the comic books on which the AMC series is based. The bourbon was “good enough for the living, and sought after by the dead,” according to the launch announcement.