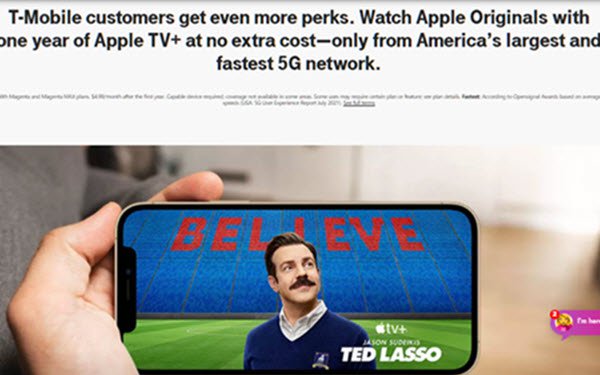 Adding to the growing number of free streaming subscriptions linked to high-end mobile service plans, T-Mobile will begin offering a free year of Apple TV+ to new and existing customers of its unlimited Magenta and Magenta MAX plans starting Aug. 25.

Streaming is the #1 use of Verizon’s network, accounting for half of overall traffic, according to Verizon.

T-Mobile and Netflix were the first to partner, in 2017, offering a free subscription to T-Mobile ONE customers with two or more voice lines, as long as they remained customers. Currently, most T-Mobile Magenta and Magenta Max plans include ongoing Netflix access at no additional charge.

At Disney+’s launch, also in November 2019, a 12-month free trial of the streaming service was available to Verizon customers on top-tier unlimited and 5G home internet plans. In 2020, the partners introduced a free, 12-month Disney+ trial to the Disney bundle (Disney+, Hulu and ESPN+) for customers of two Verizon unlimited plans.

Other Verizon plans include ongoing access to the Disney bundle, or six months of Disney+, plus limited-time access to the Discovery and Apple services, cloud storage and device-plan discounts.

AT&T is also in the game.

Some unlimited AT&T plans include access to the ad-free, $14.99-per-month tier of HBO Max.