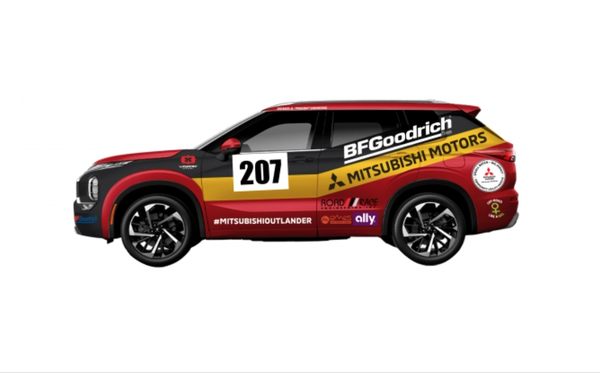 Mitsubishi Motors North America will enter a 2022 Mitsubishi Outlander in this year’s Rebelle Rally, whose sponsors include Jeep and Yeti.

The automaker, which has been emphasizing vehicle capabilities in its marketing as of late, unveiled a rendering of the vehicle that will compete in the grueling all-women’s off-road navigational competition this October.

The Outlander’s special paint scheme pays tribute to a history-making win in another famed race, the Dakar Rally,  20 years ago, when Jutta Kleinschmidt drove a Mitsubishi Pajero to victory in 2001, becoming the only woman ever to win.

In addition to honoring the 20th anniversary of the win, Mitsubishi will celebrate the brand’s 40th anniversary in the United States, partnering with military veterans charity Record the Journey to enter the Rebelle for a third consecutive year.

Mitsubishi Motors is the most successful manufacturer in Dakar Rally history with 12 wins, including seven consecutive starting with Kleinschmidt’s victory in 2001.

The Super All-wheel Control all-wheel drive system, as well as other innovations on the all-new 2022 Outlander, can trace their concept and development directly back to the legendary racing Pajero (known as Montero in the U.S.), according to the automaker.

The Rebelle Rally is the first women’s off-road navigation rally in the United States. Another automaker, Nissan’s luxury division, Infiniti, also sponsored a team, which drove a QX80 in last year’s competition.

The 2021 Rebelle Rally is scheduled for Oct. 7-16 and will cover more than 1,200 miles across Nevada and Southern California.

MMNA’s participation in the Rebelle Rally started in 2019, when the brand partnered with Record the Journey (RTJ), a nonprofit dedicated to helping military veterans successfully transition to civilian life.

As part of MMNA’s “Small Batch – Big Impact” social-good program, RTJ received the loan of an Eclipse Cross to compete in the Rebelle, finishing second in the CUV class with the event’s first adaptive athlete – U.S. Air Force veteran Karah Behrend – at the wheel.

The “Small Batch – Big Impact” program is a continuation of MMNA’s corporate social responsibility initiative, through which the company and its dealer partners create a series of vehicle loans to small nonprofits to help support local communities.