Is The RFP Process Broken? Most Clients And Agencies Think So 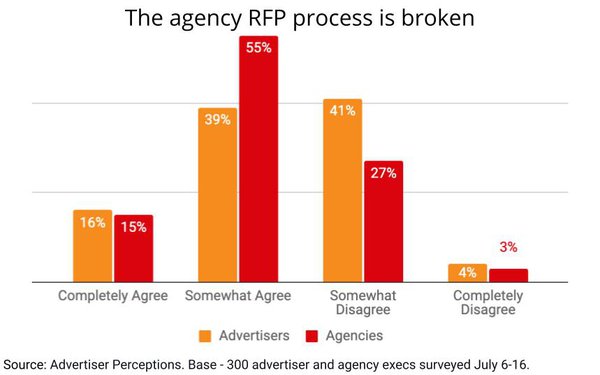 When it comes to the process of handling RFPs (requests for proposals) for advertising account pitches, advertisers and agencies often seem far apart. Except on one thing: a majority of both stakeholders believe it is broken.

That's the finding of a study of advertisers and agencies conducted last month by Advertiser Perceptions for MediaPost to understand where ad executives stand, and how they would fix the process.

Not surprisingly, a higher percentage of ad agency executives (70%) believe the process is broken than their client counterparts (55%), but a majority of both sides believe account pitches are due for an overhaul. That's where the agreement seems to split, and the finger-pointing begins to take off.

While advertisers fault agencies for their lack of understanding about their account needs -- their top response (55%) for what they believe is wrong for with the RFP process -- a corresponding percentage of agency execs believe advertisers don't supply them with enough information to make a suitable pitch.

Beyond that, advertisers kvetch that they don't get to vet who works on their account, assert that the advertising accountability structure needs to change, and that the current RFP process doesn't give them an opportunity to see their agencies in action before they select them.

On the agency side, respondents complain that they don't have sufficient opportunity to discuss the parameters of an RFP with clients beyond the questions they are asked to respond to, that they can't address the agency's own needs in the process, and that there is too much focus on price and little interaction with clients that sets the process off on a "bad footing." 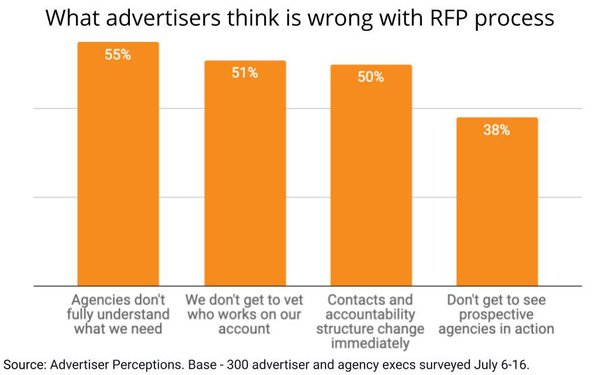 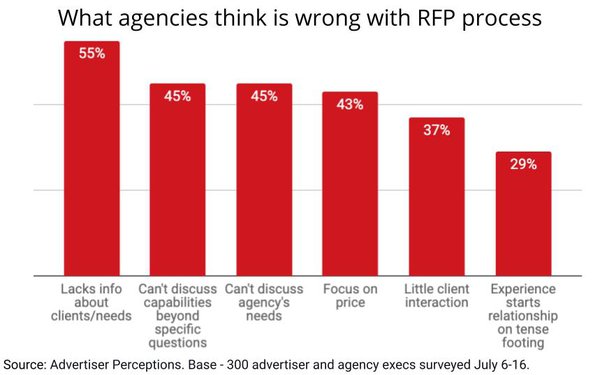 advertiser-agency relationship, advertising, agency, research
1 comment about "Is The RFP Process Broken? Most Clients And Agencies Think So".
Check to receive email when comments are posted.
Next story loading