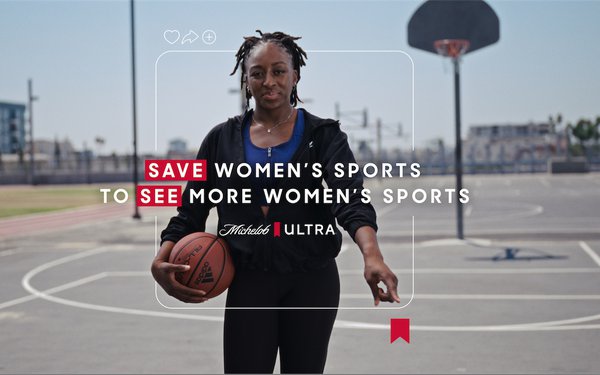 Anheuser-Busch’s Michelob Ultra, the fastest-growing US. beer brand and second in sales (behind A-B’s Bud Light), is throwing its considerable weight -- $100 million, it says -- behind gender equity in sports.

On Women’s Equality Day today, the brand announced its commitment to the cause, highlighted by a commercial that encourages consumers to hit “save” on social media women’s sports highlights so that similar posts will show up more often in feeds.

“When we hit save on women’s sports, we all see more women’s sports,” notes the 60-second spot, which features three sports figures preaching inclusivity and tolerance. They are Nneka Ogwumike, head of the Women’s National Basketball Players Association of the WNBA, of which Michelob Ultra is official beer sponsor; track star CeCe Telfer, the first openly transgender female athlete to win a NCAA title; and basketball analyst Andraya Carter.

“You don’t have to like what we just said,” they conclude. “Actually, don’t like it. Save it.”

The spot will run primarily during NFL, PGA Tour and NBA coverage over the coming months, as well as on connected TV and streaming platforms.

The ad comes from Gut Agency, which should take note that Michelob Ultra’s pledge of $100 million in visibility for female athletes also includes equal representation of male and female athletes in all ad creative moving forward -- and the inclusion of female athletes in 50% of all network product and lifestyle ad inventory through 2025.

In addition, the brand promised 50/50 gender parity on its “Team Ultra” lineup of athletes and influencers, which has already added such names as Serena Williams and Alex Morgan in the past year or so.

The brand provided no specifics on how the $100 million “commitment” would be allocated -- not for a media buy, but in “equivalency in visibility for female athletes,” a spokesperson noted.

“There’s so much more we can do to help support equal pay when it comes to women’s sports,” stated Ricardo Marques, vice president of marketing, Michelob Ultra. “We need to set the example, and the time for quality has always been now. Our commitment demonstrates Michelob Ultra’s core belief that female athletes deserve an equal experience, whether they’re on the court, in the newsroom or on our TV screens.”