CTV Accounts For 60% Of Premium Video Ad Views, Programmatic Buys Now Up To 24% 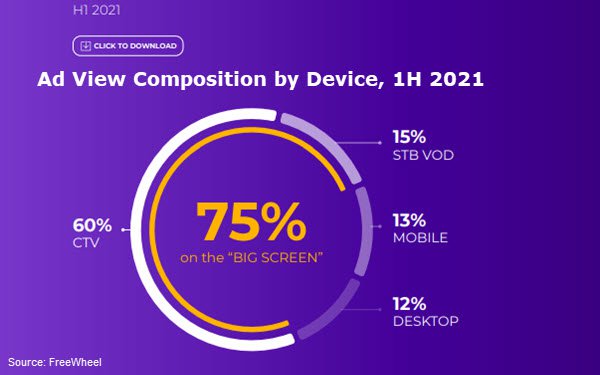 Premium video ad views in the U.S. jumped 50% in this year’s first half compared to first-half 2020 — and connected TV (CTV) accounted for 60% of those views, according to FreeWheel’s latest U.S. Video Marketplace Report.

Set-top box video-on-demand came in a distant second, generating 15% of ad views. Combined with CTV, that means that fully 75% of video ad views were experienced on big screens (above).

Mobile and desktop generated 13% and 12% of ad views, respectively.

Roku and Amazon Fire TV devices continued to dominate CTV, with 43% and 26% of ad views, respectively — or more than three-quarters of views combined.

At 8%, smart TVs — which continue to invest in their native apps to try to grab share from Roku and Amazon —  are slightly ahead of Chromecast and gaming consoles. 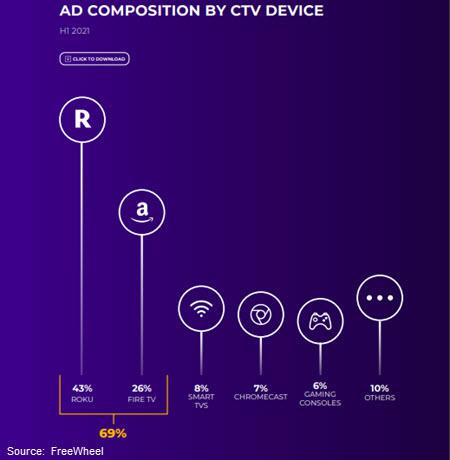 By distribution platform, D2C streaming services reached 45% of ad views in the first half — edging past TV Everywhere (TVE), which held the majority share in 2020’s first half. 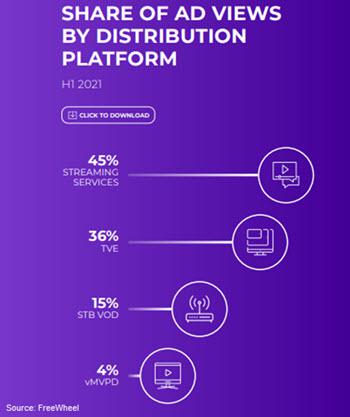 The streaming services’ growth reflects the launches of Discovery+ and Paramount+ in January and March 2021, respectively, as well as HBO Max’s introduction of an ad-supported tier in early June.

Netflix and Hulu continue to lose share to Disney+ and the newer major contenders. (Amazon Prime Video isn’t included in the data.) 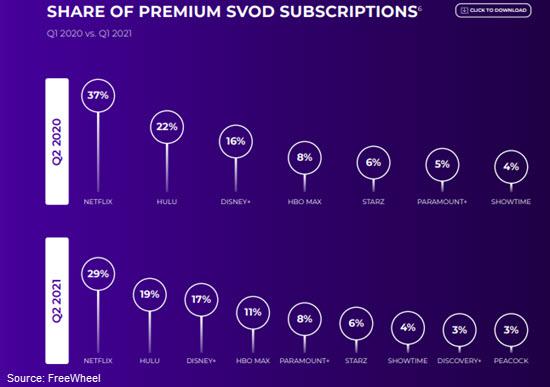 The entertainment vertical continues to lead the premium TV video ecosystem, with 92% of ad views – compared to just 5% for news and 3% for sports.

While some services, including Paramount+ and Peacock, are focused on content diversity, offering sports, comedies, dramas and movies, WarnerMedia is keeping HBO Max dedicated to entertainment and next year creating a dedicated CNN streamer, notes the report.

More than half (51%) of digital platforms’ ad views were driven by live content in the first half. Live 24/7 content feeds are the cornerstone of the increasingly popular FAST (free, ad-supported streaming TV) model.

Within the growing number of addressable ad campaigns, 60% 60% of targeting segments employed were behavioral segments and 40% used demographic criteria.