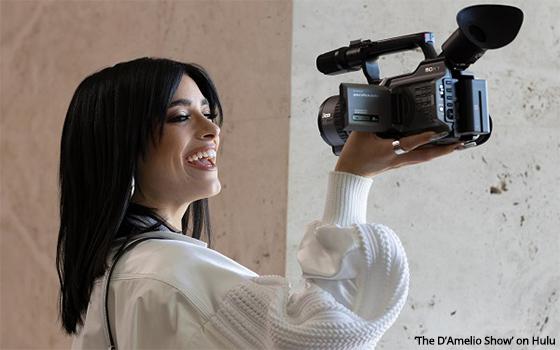 Here is a statement that many will no doubt disagree with: There is absolutely nothing about social media that is good or beneficial to anyone. Period.

On the contrary, social media spawns, among other things, hatred, misinformation and shallow bumper-sticker sayings that elicit strong emotions but ultimately mean nothing.

Social media has also created a class of so-called superstars who rise quickly in terms of their notoriety, but then suffer terribly when their time in the limelight creates pressures that they eventually learn they cannot completely handle.

Such would appear to be the case with the two teenage D’Amelio sisters -- Charli, 16, and Dixie, 19 (pictured above) -- whose story of social media stardom is the subject of a new docuseries that starts streaming Friday on Hulu.

The show, titled “The D’Amelio Show,” traces the sisters’ rise in the social media ranks, starting with Charli, whose homemade videos of herself dancing or hanging out with friends inexplicably drew followers numbering in the many tens of millions in about a year.

The press materials for this show are a little vague about which social media platforms Charli D’Amelio has had the most success with.

TikTok is mentioned enough to make one think that TikTok has worked best for her, but YouTube, Twitter and Instagram are also huge participants in her ascent to fame.

In the wake of Charli’s fame, her older sister, Dixie, has launched a social media empire of her own and now also has tens of millions of followers, although not as many as her sister.

As “The D’Amelio Show” begins, we learn that the whole family -- the sisters and their mother and father -- have moved lock, stock and barrel from their “normal” life in Connecticut to Los Angeles to capitalize on all of the money-making opportunities that have come the girls’ way since they rocketed to fame.

One wonders why the D’Amelio sisters need to have a TV show at all, since their exposure on social media far exceeds the viewership they will likely experience for this TV show.

In addition, they hardly need a TV show to help them monetize their fame. As the show reveals, Charli seemingly has dozens of business interests in the works as the result of her popularity -- most of them still in the formative stages.

For her part, Dixie wants to be a pop singer. She is seen in Episode One of “The D’Amelio Show” working with various music-industry pros to help turn her into a music star.

In the show, the claim is made that one of her songs and its accompanying video have generated 1 billion views on TikTok, 104 million on YouTube and 77.5 million listens on Spotify. If true, these numbers are astonishing.

A TV show, however, does give the D’Amelio sisters and their parents an additional platform -- one made for long-form storytelling -- to tell their story.

As a result, you get a pretty good look at the lives of two social media stars whose rise to fame is inexplicable even to them.

Perhaps the most surprising aspect of the series premiere of “The D’Amelio Show” is its candid inclusion of the dark side of sudden social media fame.

In the show, sister Dixie is the one who seems most adversely affected by the exposure she has engineered for herself on social media. There, she gets verbally crucified for seemingly everything she does.

Obviously, she is a participant in this cycle because, as a social media star, she is likely addicted to the behavior of filming herself all day long and posting video clips on social media.

Then, all of those people who enjoy writing mean tweets and other nasty social media messages -- people who feel free to express themselves in this way because they are anonymous -- have a field day lambasting her.

At the conclusion of Episode One, Dixie is seen crying uncontrollably after the latest assault.

Thus, instead of making us feel awed by the sudden social media fame this family is profiting from, we feel a kind of pity for them.

To put it bluntly, social media is not making them happy in the way they expected that it would. Instead, the opposite appears to be true.

For Dixie’s sake, I hope the series ends with the D’Amelios high-tailing it back to Connecticut to resume their former, happy life in total obscurity.

“The D’Amelio Show” starts streaming on Friday (September 3) on Hulu.