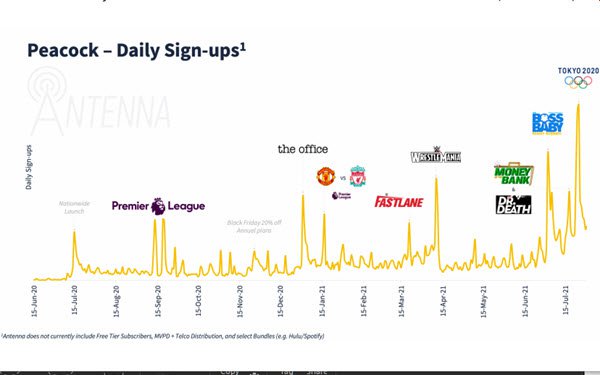 While primetime viewing for this summer’s Tokyo Olympics was down 42% compared to the 2016 Rio Summer Olympics, the event was a success on another front: generating new paid subscriptions for its Peacock streaming service.

In fact, the games were Peacock’s biggest paid subscription driver since its nationwide launch in July 2020, pushing it to a 21% share of all new U.S. subscription-based video-on-demand subscriptions during July, according to an analysis from streaming measurement and analytics company Antenna.

That marked the first month that Peacock earned a greater-than-10% share of SVOD subscriptions.

The numbers include both paid Peacock tiers (ad-free for $9.99 per month and limited-ads version for $4.99 per month) and exclude Peacock’s free tier, subscriptions through MVPD and telco and some bundles.

The Olympics out-pulled both “The Boss Baby: Family Business” movie and WWE events — previously the biggest sign-up draws for paid Peacock — by significant margins (chart above). For example, they outpulled “Wrestlemania 37” by 108%.

During the first month after its July 15, 2020 launch, Peacock earned a 6% share of premium SVOD sign-ups. 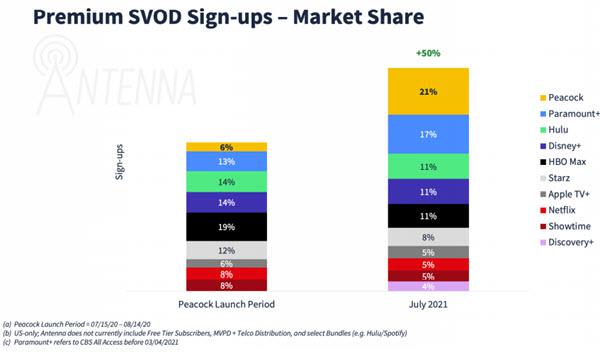 The retention rates for consumers who signed up for paid Peacock around the Olympics remain to be seen.

For big-event comparison purposes, Antenna notes that consumers who signed up around Peacock’s introduction of “The Office” had a three-month retention rate 11 points higher than the service’s eight-week benchmark average (77% versus 66%).

In a recent sports example on a rival streamer, CBS All Access (now Paramount+), those who signed up around Super Bowl LV showed a five-point higher retention rate than the eight-week average (66% versus 61%). 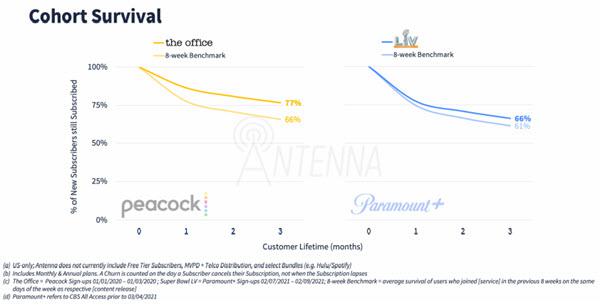 The analysis also found that more than 80% of paid Peacock’s new subscribers in July chose the Premium limited-ads plan—up from 75% in June.

Looking at subscription generation by distributors, Roku drove 11% of Peacock subscribers between the streaming service’s launch and June 2021.

This July, 17% of its sign-ups came through Roku. NBCU and Roku teamed to bring an immersive Tokyo Olympic Games hub to Roku devices.