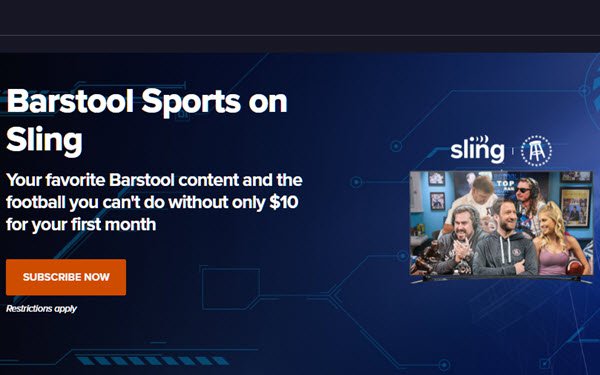 The OTT live streaming service has just announced that it will host a new channel from Barstool Sports.

Sling has been integrating Locast into its grid guide on several platforms to enable access to local channels in more than 30 markets through a single interface, according to The Streamable.

The feature has been rolling out on Amazon Fire TV and Android TV, including the Air TV Mini, and iOS and Android mobile devices.

But Locast suspended operation on Thursday, following a court decision in a copyright battle with broadcasters.

At least for now, the ruling invalidates Locast’s argument that it qualified for a nonprofit exclusion in the Copyright Act.

That exclusion was the basis for its claim that it could legally capture local broadcasters’ signals and stream them over the internet to its users, without negotiating retransmission agreements.

Sling TV’s online help area now features a headline stating “Locast is Coming Down But We Are Still Fighting For You.”

The site refers users to more information on its local bundles.

It remains to be seen whether losing the Locast integration will create dissatisfaction, or cause defections, among any substantial number of Sling subscribers.

Sling’s reference to “fighting” for its subscribers refers to its ability to keep its fees low, which is enabled to a large degree by opting not to pay broadcasters for local channel retransmission rights.

The broadcasters’ lawsuit against Locast asserted that Dish Network — Sling’s parent company — as well as DirecTV (recently spun off as part of a separate company, though AT&T retains a 70% stake) have used their ability to point subscribers to Locast to access local channels as leverage during retrans negotiations with broadcasters.

Meanwhile, Sling TV is promoting the news that it now features the new Barstool Sports Channel.

The channel, launching in time for the professional and college football seasons, is accessible through the platform’s guide by both Sling subscribers and users of Sling Free, which offers free live and on-demand content.

The channel offers live content from Barstool’s portfolio of video podcasts, blogs and video series. New episodes will be available exclusively on Sling for two weeks before wider release.

The recent gain resulted from a focus on improved streaming performance and “enhanced segmentation and targeting,” leading to the acquisition of more, higher-quality subscribers, Sling said in its Q2 earnings report.

Live-streaming OTT leader Hulu Live TV had just under 4 million  subscribers as of May, and YouTube had 3 million as of Q3 2020.