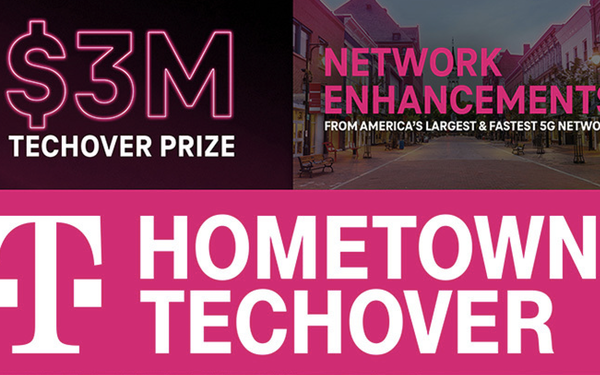 T-Mobile, determined to bring 5G to technologically underserved rural America, has named Woodstock, Illinois (pop: 25,000) the winner of its Hometown Techover contest. The mobile provider, which freely admits it couldn’t service rural communities before last year’s merger with Sprint, said that thousands of towns had entered the competition.

Woodstock was named the winner based on “project feasibility, the town’s need for a network upgrade, and town leadership interest and engagement.” The locale will receive a $3 million technology upgrade, including a $200,000 grant and consulting services; a 5G upgrade to a public space like a library, community center or town square; a Little League baseball field refurbishment; and a free public concert by country duo Florida Georgia Line.

As part of T-Mobile’s rural push, concurrently with announcing the contest in April, T-Mobile launched its Home Internet service, committed to $25 million in project development grants, and said it would build hundreds of new stores --with 7,500 new jobs -- and hire up to 2,500 hometown experts in small towns across America.

Calling wireless home broadband “one of the killer apps of 5G,” T-Mobile President/CEO Mike Sievert noted during a July investor call that the company’s Home Internet service remains on track for 500,000 customers by year’s end.

Sievert said that smaller markets and rural areas make up 40% of U.S. households, and that those markets “drove nearly one-third of our new postpaid account activations in Q2, up from about a quarter last year…. We're in the very first inning [of the company’s small-town push] and yet we're seeing the market respond. So that makes us very optimistic.”

Freier said during the call that T-Mobile will have opened 200 retail stores in small towns by year’s end, and hired 1,000 of the hometown experts in places “where it doesn't really make a whole lot of economic sense to build brick-and-mortar distribution. So this is… extending our reach into places that we ordinarily couldn't get to.”

“There's not really a 5G strategy, I think, from some of our competitors in rural America,” Freier added. “And they [rural areas] shouldn't be left behind.”

In addition to the goodies going to Woodstock itself as Hometwon Techover winner, T-Mobile will also reward 100 Woodstock households with free wireless service and Home Internet for a year, new 5G phones and a high-definition TV.