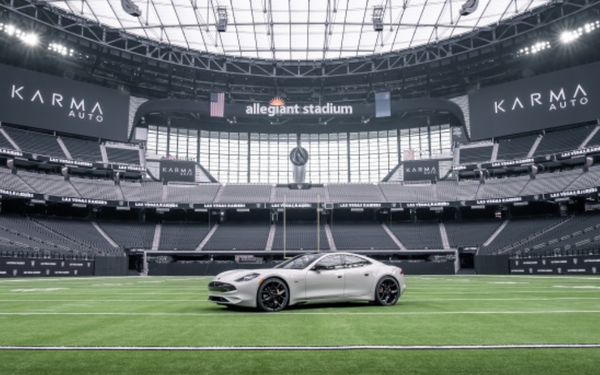 Karma Automotive has signed on as the official vehicle of the Las Vegas Raiders NFL team and Allegiant Stadium.

The luxury electric vehicles automaker will sponsor a variety of consumer-driven experiences and events geared to Raiders fans.

The relationship incorporates the Karma brand with the Raiders’ digital, print, online and broadcast channels, access to a luxury suite, club seats, and will integrate Raiders Alumni appearances.

In addition to event sponsorship opportunities, the automaker will create the Karma Auto Lounge adjacent to the Owner’s Suite on the Club level at the stadium.

The agreement includes digital signage inside Allegiant Stadium as well as outside on the massive marquee that faces the Las Vegas Strip and Interstate 15.

Karma will also sponsor a parking area that will include Karma-branded electric vehicle charging stations. ‘

The Raiders have a “fervent fan base,” says Troy Beetz, Karma’s director of marketing and partnerships.

“Karma’s passion for creating an emotional driving experience is what makes this relationship a perfect match,” Beetz says in a release.

Karma Automotive, founded in 2014, is headquartered in Irvine, California with a production facility located in Moreno Valley.

Karma’s flagship vehicle, the Revero GT, is an electric vehicle powered by dual electric motors. In 2021 Karma announced the GS-6 Series, which include both an extended-range series hybrid EV and their first-ever all-electric vehicle.