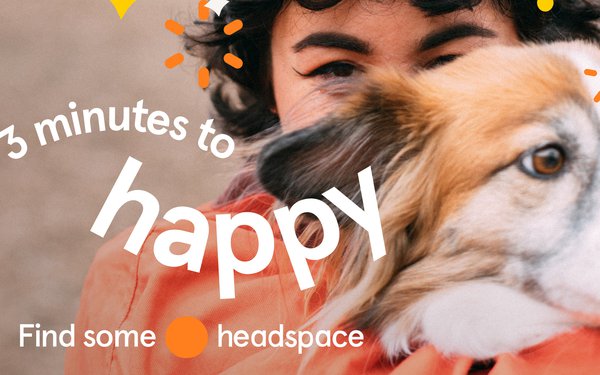 Nobody knows better than Headspace how the pandemic continues to zap people's sense of peace and well-being. So the company is launching a new ad campaign reminding them that joy -- not to mention a better night's sleep -- is just a few deep breaths away.

Called "Find Some Headspace," the new campaign is running on TV, digital and social channels, as well as out-of-home.

It's something of a departure for the meditation powerhouse. Rather than featuring whimsical animation and the familiar voice of Andy Puddicombe, the British Buddhist monk-turned-tech guru who co-founded the app back in 2010, it focuses on the experience of Headspace members.

"This was inspired by our members' stories about how meditation has changed their lives and outlook on everything," says Val Kaplan, Headspace's chief marketing officer. "We hear a lot about these 'aha' moments that our customers have after using Headspace for a short time. They'll be having some moment in their regular life, not when they're using the app, and they notice themselves responding differently to stress or frustration."

So the ads, including 30- and 15-second versions, "give people a taste of the experience, and show how powerful this tool is -- that even a few minutes a day can be life-changing," she says.

She tells D2C FYI that when the team first started working on the concept, "we were anticipating more of a return to normal coming out of COVID."

The surge in the Delta variant, of course, made it clear "that normal will look different for some time. And that means mental health, wellness and resilience are more important now than ever.”

This is the first campaign since Kaplan joined the company back in March. (She had been at Hulu). An in-house team led by Caroline Pay, chief creative officer, created the effort.

Kaplan says the decision to step away from Puddicombe's voice for this effort also reflects the platform's growth. While many early members came to Headspace because of Puddicombe's TED talks, viewed by millions, the app now has 70 million members in 190 countries, with programming provided by an expanding portfolio of teachers. One, Kessonga Giscombe, voices part of the ads.

"We wanted to represent a multitude of voices,” Kaplan adds. “We've been deliberately and strategically making sure that in addition to Andy's voice, our teachers reflect that wide variety of identities and perspectives and experiences."

The ads stress how little time it takes for people to start to reap the rewards of meditation.

The campaign aims for the top of the marketing funnel, and Kaplan hopes it will break through to a broader, wider audience. "We want to become well known in the mainstream," she says.

The company recently took another big step into mental health, announcing that it would merge with Ginger, a digital mental health program. Headspace Health, as the merged company will be called, would reportedly have a valuation of $3 billion and reach 100 million people.

"Headspace Health will democratize mental healthcare to provide the full spectrum of affordable and comprehensive support for everyone," the company says in its announcement.

Research supporting the impact of both companies keeps piling up. One recent study shows that eight weeks of Headspace use resulted in a 31% decrease in anxiety symptoms and a 46% decrease in depressive symptoms among healthy adults.

And Ginger's on-demand, team-based care model, which includes behavioral health coaching, therapy, and psychiatry, has demonstrated a 59% improvement over anxiety and 70% reduction in depression.