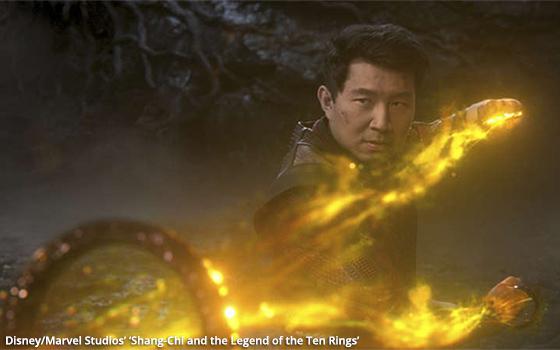 In yet another sign that the theatrical business is nearly back to its pre-pandemic ways, Walt Disney/Marvel’s “Shang-Chi and The Legend of the Ten Rings” -- massively overdelivered on expectations. It hit record-making marks for the three- and four-day Labor Day weekend.

Industry tracking had projected the movie was on pace to pull in $50 million in U.S. box office revenues for three days. In 4,300 locations, the movie ended up earning $20,930 at each location for four days.

In the pandemic period -- starting March 2020 -- “Shang-Chi” has now posted the second-best three-day result behind Disney’s “Black Widow” at $80 million.

“Shang-Chi” did not have a streaming day-and-date simultaneous opening with theaters.

Disney-Marvel spent a modest $11.2 million in national TV advertising on “Shang-Chi” since May 3, with 4,685 airings resulting in 1.3 billion impressions, according to an estimate from iSpot.tv. Typical wide-release movies can see national TV spend of more than $20 million.

Disney-owned ABC racked up 151.5 million impressions collectively for a number of network programs.

Over the most recent period -- August 7 through September 5 -- movie studios have spent an estimated $41.4 million in national TV advertising.