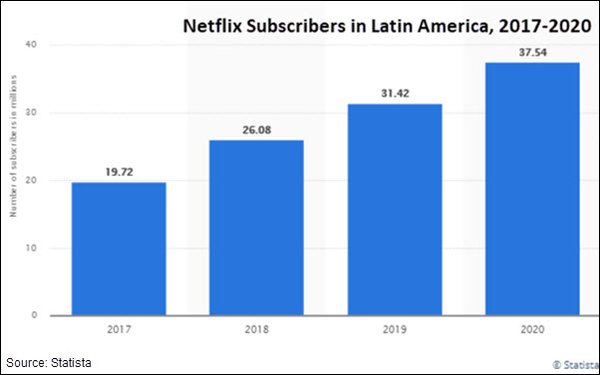 Last year, Netflix had 37.5 million paid streaming subscribers in Latin America —  generating more than $3 billion, or about 13% of the company’s global revenue, according to Statista (chart above).

New streaming services entering Latin America this year alone include Paramount+ in March, HBO Max in June and Disney’s Star+, in August. Disney's Hulu and Discovery+ also plan to expand into the region this year.

Netflix’s performance, and a new SVOD forecast for Latin America from Digital TV Research, underscore the opportunities underlying the trend.

The new report estimates that despite several poor economies, Latin America will have 131 million SVOD subscriptions by 2026 — up by 76 million from an estimated 76 million at the end of 2021.

Brazil will remain the market leader in Latin America, with 49 million subscriptions by 2026. Mexico will bring in another 32 million.

Five U.S.-based platforms — Netflix, Amazon Prime Video, Disney+, Apple TV+ and HBO Max — will account for 91% of the region’s paying SVOD subscriptions by the end of 2026, according to Simon Murray, principal analyst at Digital TV Research.

Long-established Netflix will continue to lead the market, but its market share will fall. Disney+ will have 33 million, and HBO Max 10 million.