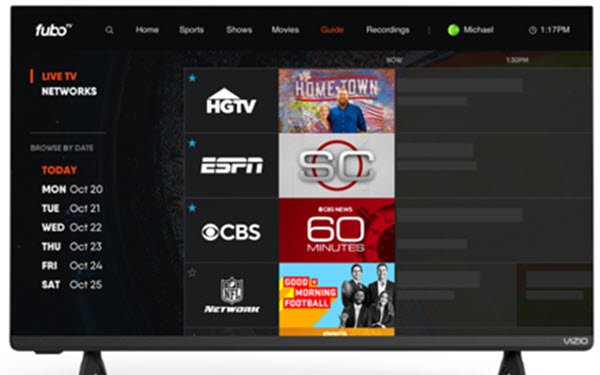 SmartCast users who buy a fuboTV subscription can now access the streaming service in the app row on the platform’s home screen.

fuboTV, which offers more than 100 channels that stream tens of thousands of live sporting events per year, plus news and entertainment content, says that 94% of its subscribers watch content on the big screen when possible.

The fuboTV app on Smartcast includes personalized profiles, recording and recommendations for up to six users per subscription; a customizable guide, and easy binge-watching through a “watch next” feature.

Vizio had more than 12 million SmartCast accounts (and 5.3 million accounts using its legacy software) as of its March 2021 IPO filing.

It reported having sold over 80 million TVs and 11 million soundbars since the company’s founding, including 7.1 million TVs sold in 2020.

But while hardware still generates most of its net revenue, Platform+ -- the SmartCast smart TV software combined with Vizio's Inscape analytics, data and content recognition subsidiary -- are driving growth. Platform+'s net revenue jumped 304.4%, to $147.2 million, in 2020.

Vizio sells advertising on ad-supported video on demand services WatchFree and the Vizio Free Channel, and ads on the SmartCast home screen. It also gets a cut of subscriptions and other purchases made through third-party apps on its platform, and charges streaming partners to place logos on TV boxes or branded remote buttons.