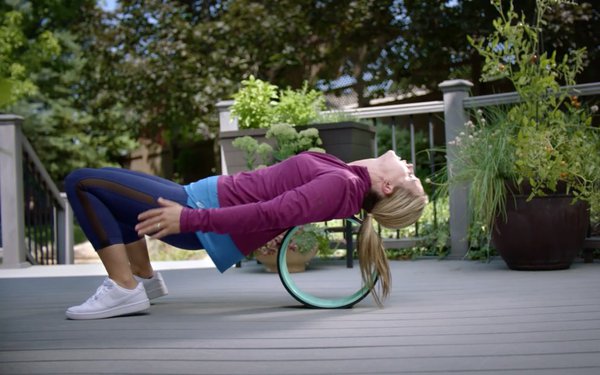 Chirp, a back-pain-reducing exercise wheel, will launch its first brand advertising Sept. 13 with two humorous long-form Facebook spots focusing on type-A personalities who use the product to reduce stress.

Our favorite, “Karen,” is a mockumentary about a woman named Sharon who keeps getting called “Karen” by mistake. This leads to increasing rage until her partner Don -- the object of much of her wrath -- gifts her with Chirp.

The other spot, “Troll,” a sort of spoof on office situations, is about a rather intimidating “bridge toll” whose Chirp allows him to hold a day job as a sales rep.

Chirp, registered with the FDA as a Class 1 medical device and formerly called Plexus, says it has sold 3 million units since a non-winning but publicity-generating appearance on ABC’s “Shark Tank” last year. It’s sold both direct-to-consumer and at brick-and-mortar retailers like Target.

Brian Nelson, Chirp’s director of marketing, told Marketing Daily that the brand will use Facebook to test its “Feel Good. Do More” campaign before expanding it onto other platforms.

First, three or four different intros to the films will be tested to see which “get the most people to stop and watch.” The brand will then measure engagement on smaller audiences representing different segmentations of its target demo, namely “people with back pain of all ages.”

“This shows us data like views, length of views, click-throughs and conversions to sales,” Nelson noted. “Based on the sales and engagement with versions, we [will] scale the most successful version with media dollars as we optimize other versions to test against different audiences and demographics. The optimized version that performs the best will then be scaled to Instagram and shared on connected TV platforms.”

Patrick Maravilla, executive creative director and the campaign’s writer at Salt Lake City agency Little Big Engine added that various versions of the spots will focus “on different value propositions…to see if they can outperform the hero [the long-form spot] and lead to more sales.”

To accomplish this, he said, the agency did single shoots that would enable it “to create enough different videos and variations that can fill an entire sales funnel for the quarter.”

“When creating a sales video for social, you have to approach production in a very different way than a traditional TV shoot,” Maravilla explained. “With a TV shoot, you have a script and shoot it with maybe a few alt lines to explore in the edit. But with social platforms, you have to plan a big brand idea” with “different story lines [and] different versions that can be cut to work together.”

A shorter version of “Karen,” for instance, has just “Don talking about his experience buying Chirp to get his Sharon back.” Another has just Sharon getting upset about receiving her Chirp -- and then falling in love with the product.  And even shorter “bite-sized content…that works hard to sell” will “use type and graphics over the footage.”