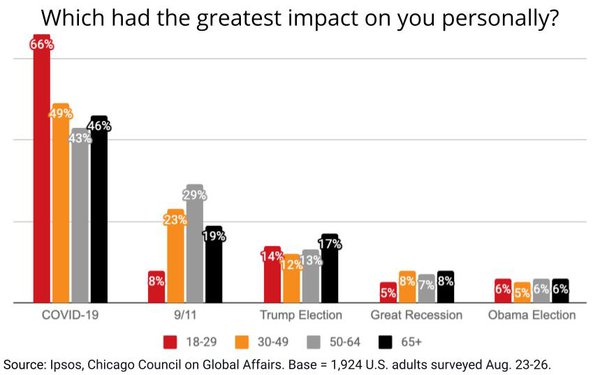 Twenty years later, the September 11 terrorist attacks remain one of the most indelible personal events among Americans.

Asked by Ipsos and the Chicago Council on Global Affairs to rank which of several potentially life-altering events, 9/11 ranks second, just behind the current COVID-19 pandemic, as the event that has had the single greatest impact on Americans personally.

Not surprisingly, 9/11 ranked lowest among America's youngest adults -- persons 18-29 -- some of whom weren't even born or were very young when it occurred. That age cohort actually ranked the election of Donald Trump as being more significant for them personally than 9/11, though they also ranked the impact of COVID-19 at the greatest proportion of any adult demographic.

"In these responses, some recency bias is doubtless at play," Ipsos' analysts write in a report released this week by the consumer research firm. "Nevertheless, that 9/11 still ranks so highly speaks to the enduring impact it had on the country. With the twentieth anniversary of 9/11 approaching on Saturday, its imprint is still indelibly there for those who were alive to witness it."

The report does not speculate on the marketing implications of 9/11 -- or the other life-impacting events -- but they clearly weigh heavily as a cultural force for many Americans.

covid-19, events, politics, research
2 comments about "9/11 Ranks Second Only To COVID As Life-Altering Event For Americans".
Check to receive email when comments are posted.
Read more comments >
Next story loading