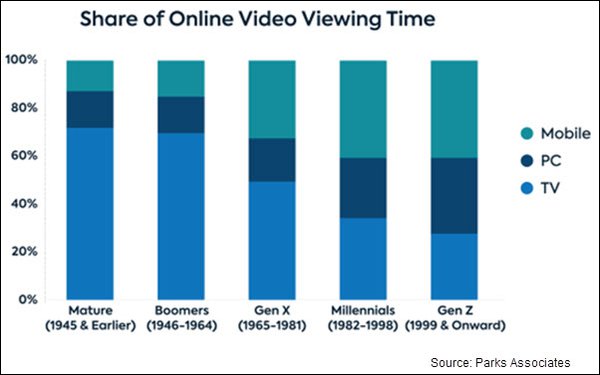 The paper is based primarily on a Q1 survey that was nationally representative of U.S. broadband households (which account for 88% of all households), supplemented by a Q3 survey.

Like pay-TV operators, CTV operators are increasingly looking for a cut of ad revenue and subscriptions generated via their platforms — and they are generally taking 30% to 40% of those revenues, according to Parks.

An impressive 92% report viewing streaming video at least weekly, with 10% only viewing via non-subscription methods.

Television remains the primary viewing device among all video watchers, including those who watch streaming video, but viewership is tilting away from TV as mobile and PCs gain. 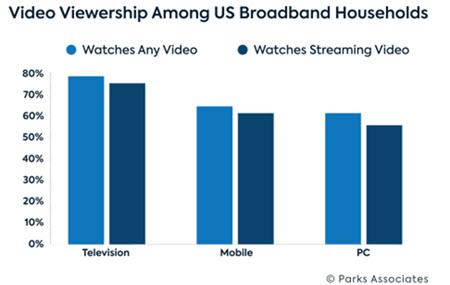 To stream video on a TV screen, 60% of CTV users primarily use smart TVs and streaming media players. Among the 40% that use other solutions, nearly a quarter primarily use a non-TV platform like a PC or mobile device to transmit video to their TV screen, with pay-TV set-top boxes and gaming consoles the next most adopted platforms.

Overall, 72% of households report regularly using multiple platforms for video viewing. More than 40% use the whole gamut — TV and TV-connected devices, mobile (including smartphones and tablets), and PCs, and nearly a third view on some combination of these.

Some of the most interesting findings relate to how different demographic groups use various platforms to view video.

As we’d expect, multi-platform viewing dominates among younger generations, while seniors are most likely to report watching exclusively on televisions.

Many consumers, across age groups, view video on mobile to some extent, but very few exclusively use a mobile device for this purpose.

In Q1, Millennials and Gen Z-ers report spending an equal share of their time viewing on mobile devices, but the latter are more likely to view video on a PC than prior generations.

In fact, Gen Z spends almost as much time per week viewing video on  PCs as on TVs (chart at top of page).

About 80% of both age groups report that they view video on more than one platform at least monthly.

Takeaway: “Although the big-screen experience is and remains important to consumers, supporting and improving the consumer experiences on mobile and the PC platforms are important considerations, especially to reach Gen Z and millennials,” observe the researchers.

Households with children and new (younger) households over-index on mobile viewing. “Young and established” households are nearly identical to the overall average in terms of platform preferences. 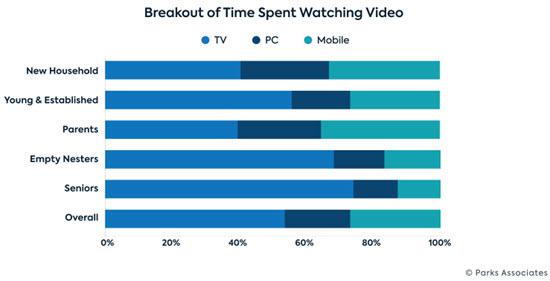 Here’s the breakdown of device usage by lifestage among CTV users: 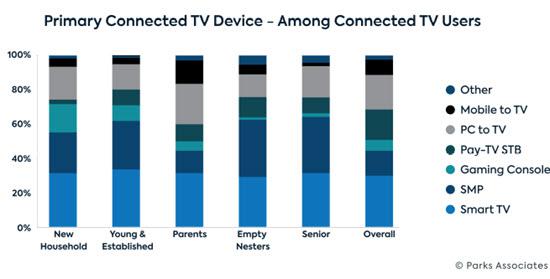 And here’s the breakdown of time spent viewing content by platform: 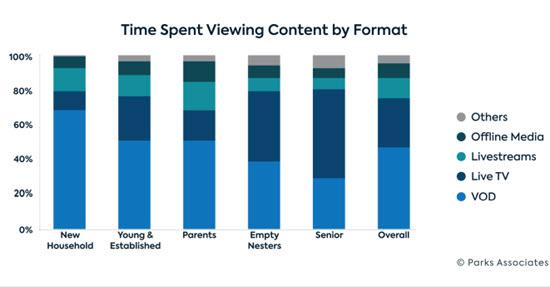