Burns' Ali Documentary Might Be The Greatest TV Show This Year 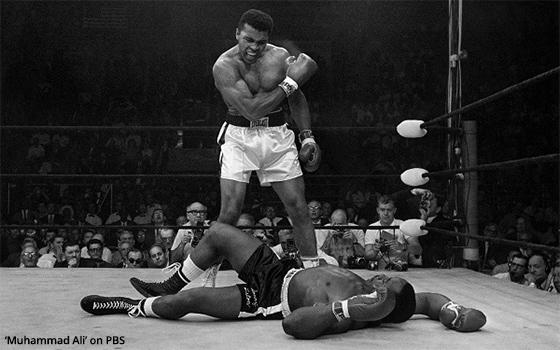 Our family possesses a photo of an encounter with Muhammad Ali in a small airport in Indiana sometime in the 1990s, in which Ali is seen playfully lifting our young niece and planting a big kiss on her right cheek as her mother and older sister smile happily for the camera.

Of course, no one in our family had ever met him before, but this kind of display of affection on his part to a group of total strangers was part of what Muhammad Ali was all about, according to a new, sensational made-for-television documentary about Ali that starts this coming Sunday on PBS and then runs for three more consecutive evenings (through Wednesday, September 22).

The documentary reports that Ali vowed at an early age to always make fans feel welcome. The documentary says Ali, then an up-and-coming amateur teen boxer, made this vow after he waited hours to meet the then-middleweight champion of the world, Sugar Ray Robinson, on a Harlem street and later felt that Robinson snubbed him.

But the story and psyche of Muhammad Ali encompass a lot more than just his playful kindnesses to strangers. This man was once arguably the most famous human on the planet Earth and possibly the most well-liked -- although, as this documentary points out, that was not always the case.

This documentary is made up of four, two-hour parts (a total of eight hours), which makes it by far the longest documentary on Ali that has yet been made.

It just so happens that its length is one of its best assets, for it allows the life story of Ali -- born Cassius Marcellus Clay Jr. in Louisville, Kentucky, on January 17, 1942 -- to be told more fully and in more detail than it has ever been told before, at least in the form of a documentary.

This documentary’s great length and the meticulous storytelling that goes along with it are hallmarks of Ken Burns, who is credited as director, along with co-directors Sarah Burns (his daughter) and David McMahon (her husband), who collaborated with Burns on “The Central Park Five” and the four-hour “Jackie Robinson.”

The narrator of “Muhammad Ali” is actor Keith David, who has narrated previous Burns documentaries such as “The War,” “Unforgivable Blackness: The Rise and Fall of Jack Johnson” and “Baseball.”

He is the best of the Burns narrators, and listening to his voice while watching “Muhammad Ali” is one of the film’s premiere pleasures.

Another great feature of the Burns school of documentary filmmaking is that, somehow, he and his collaborators manage to make these incredibly detailed documentaries -- often of epic lengths -- without ever resorting to the kinds of cheesy reenactments that are used time and time again just about everywhere else on television.

Thus, in “Muhammad Ali,” as in Burns’ many other documentaries for PBS, you get a motherlode of spellbinding film and video footage -- along with still photos, and audio from decades-old interviews -- that have not been seen or heard by anyone in decades.

In other words, the Burnses put the work in, and it shows. As a result, this “Muhammad Ali” documentary emerges as possibly the most satisfying, riveting and moving TV experience of the year.