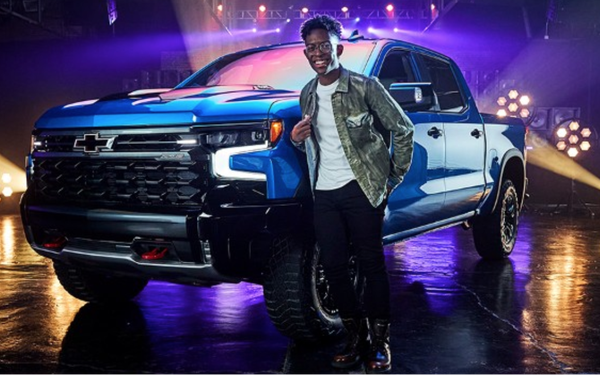 The video, which debuted Sept. 9, features actor Chris Pratt, rap/country hybrid artist Breland, and 2020 NASCAR Cup Champion Chase Elliott. During the 60-second spot, NBC sports reporter Michele Tafoya provides a play-by-play of the action where each of the celebs show how they use the trucks’ features.

Pratt, who owns a ranch, uses the up to eight available cameras to track down his steer. Breland, who was previously featured in a TikTok campaign for Silverado, highlights the design of the Silverado ZR2 on the set of a video shoot. Elliott pulls his boat out of the lake using the Silverado ZR2’s trailering technology. Chad Hall, an off-road racer and engineer, is shown putting the Silverado ZR2’s off-road capabilities to the test.

Nielsen data showed that an average of 24.4 million viewers tuned in for the Tampa Bay Buccaneers’ 31-29 win over the Dallas Cowboys. Another 1.6 million viewers streamed the telecast on various platforms, bringing the total average audience to 26 million, according to NBC.

Chevy took the opportunity to run another spot for its current model year 2021 Silverado featuring Walter the cat.  That spot, which debuted during the Olympics in July, has already been viewed more than 1.1 million times on YouTube alone.

"We knew a lot of advertisers were going to feature athletes doing incredible things, and we wanted to stand out," Commonwealth/McCann North America creative lead Gary Pascoe tells Muse. "So, Walter the cat became our athlete."

Social media response to the Walter spot has been huge. One comment on YouTube says it's “hands down the best Chevy advertisement of all time,” while another notes Chevrolet needs to do an entire series of Walter the cat commercials.

Kelly MacDonald, director, Chevrolet truck marketing, said “the capability, the enhancements and everything that Silverado can do” will be the focus of marketing that will break in the first quarter of next year for the pickup truck.

But she didn’t dismiss the idea of another appearance by Walter.

“We are in development of all of our marketing materials,” MacDonald tells Marketing Daily. “We know there’s a lot of love out there for Walter, so you never know when he’s going to make surprise appearances or cameos throughout our advertising.”