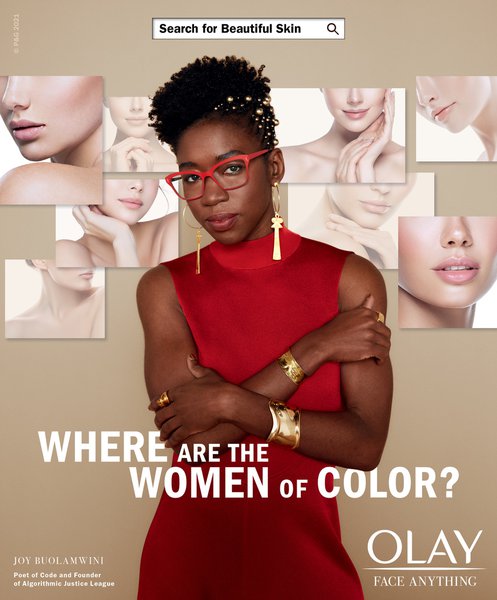 Olay wants to root out the built-in bias in beauty images, launching a new campaign aimed at helping young coders-to-be.

The campaign calls attention to "coded bias" and the many ways beauty filters and search results promote Eurocentric beauty standards -- which reinforces harmful stereotypes that exclude women of color.

"Women of color are about 40% of the population," says Stephanie Headley, vice president of Olay. "Yet when you search for terms like 'beautiful woman,' 'beautiful skin' or 'beautiful face,' they only account for 20% of search results."

Those posting to Instagram or Twitter using the #decodethebias hashtag will help Olay raise enough funds to send 1,000 young girls to coding camp.

The brand connection may seem murky at first. Most women don't think about Olay until at least a few wrinkles appear. The critical years for steering girls toward STEM happens while they are still in primary school.

Headley says the connection is both real and important and that real change in the industry can only happen by hiring more women, especially women of color, in tech roles.

"As a woman of color, I have been privy to how the beauty industry has perpetuated exclusion, and that exclusion has gone from print to TV and now to algorithms," she tells Marketing Daily.

And for another, Olay wants to set an example to others in an industry that's long promoted primarily white images. The company is working with AJL's audit partner, O'Neil Risk Consulting & Algorithmic Auditing, to evaluate its own Olay Skin Advisor AI platform for coded bias.

Headley has experienced the disparity firsthand, teaching high-school math in an earlier career. "I was one of the very few women and the only woman of color as I took higher and higher levels of math," she says. The career switch to Olay -- "that wasn't the plan, but life happens" -- has heightened her awareness.

The effort is timed to National Coding Week. Besides the 60-second TV spot airing nationally, Olay is also running a targeted print campaign.

Finding the right message wasn't easy. "This is a more-complex topic, and probably not what people expect from Olay," Headley says. Buolamwini, best known for her "Coded Bias" show on Netflix and TED Talk, "is the right spokesperson. She is so positive and makes the point about both gender and race so strongly. This advances the conversation around inclusivity."