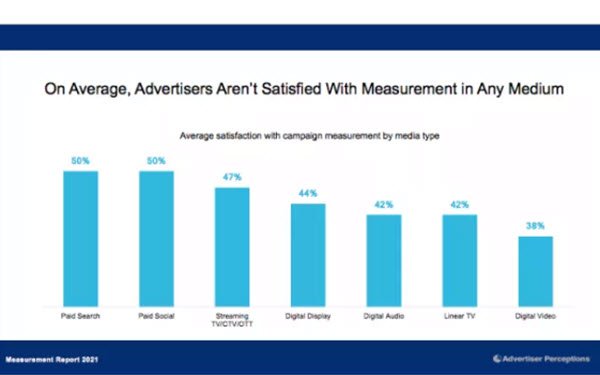 On average, fewer than half of advertisers are satisfied with available measurement options for most media — and they are least satisfied with digital video, linear TV and digital audio, according to a new survey from Advertiser Perceptions.

Just 38% of surveyed advertisers express satisfaction with digital video measurement, and 42% each with linear TV and digital audio measurement, according to the researcher, which surveyed 205 professionals involved in the evaluation and purchase of advertising measurement.

The top three are paid search and paid social media, at 50% each, and streaming TV/CTV/OTT, at 47%.

Given the current controversy over Nielsen’s undercounting of TV ratings during the peak pandemic months — including the Media Ratings Council having now suspended Nielsen’s national and local ratings services — it might seem surprising that linear TV is a bit better-perceived than digital video.

With digital video, advertisers are frustrated that this relatively new medium is unable to measure what matters most to them: sales and brand lifts, he said.

In general, advertisers have less trust in third-party data than first-party data, are dissatisfied with the rising costs of measurement, and would like better monitoring to avoid fraud, the research indicates.