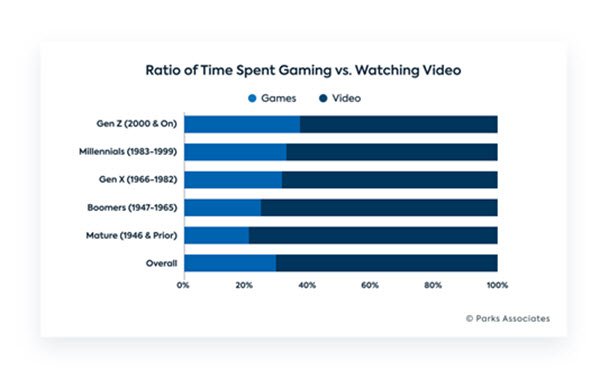 There’s no mystery about Netflix’s recent move to begin offering its first in-app games, based on its popular “Stranger Things” franchise.

In its Q4 2018 letter to investors, the world’s largest streaming service said that video gaming — specifically Fortnite — represented a more serious competitive threat than HBO, causing Netflix to look to partner or become a gaming competitor to Fortnite.

“We’re in the business of creating these amazing, deep universes and compelling characters and people come to love those universes and want to immerse themselves and get to know the characters better,” Netflix COO Greg Peters said this year about the company’s move into gaming. “There’s no doubt that games are going to be an important form of entertainment and important modality to deepen that fan experience, so we’re going to keep going.”

Netflix is by no means the only OTT streaming player jumping into games.

As Parks Associates points out in its new whitepaper on the evolving digital landscape, Amazon has acquired Twitch, and Apple launched the Apple Arcade gaming subscription bundle as part of the Apple One subscription program that also includes Apple TV+ and other services.

Parks’ report, based primarily on a Q1 survey that was nationally representative of U.S. broadband households, confirms that gaming time is increasingly grabbing share from other leisure activities, including video consumption.

Parks Associates asked heads of broadband households how much time they spend in a given week playing video games, and compared that to average time spent consuming streaming video.

On average overall, the householders reported spending about 30% of their combined video gaming and OTT video watching time on gaming.

The average Gen Z householder was found to have about a 2:3 ratio of time spent playing video games versus time spent watching streaming video.

Millennials spend about a third of that combined time playing video games, Gen X-ers slightly less than a third, boomers about a quarter, and “mature” consumers about 20%.

Nor is gaming the only growing competitor for consumers' time. More than 60% of those surveyed reported using streaming music services.