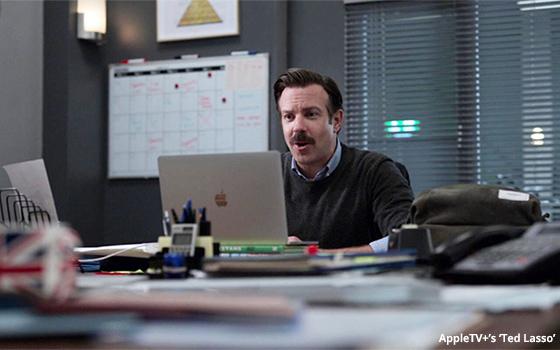 In an eye-opening example of how Apple is using its Apple TV+ streaming platform to promote its devices and services, a single recent episode of its popular comedy “Ted Lasso” featured 36 shots of Apple products.

That’s 1.24 Apple products per minute, according to an analysis of 74 episodes of several Apple TV+ shows (about 2,600 minutes) over the past month by The Wall Street Journal’s Kenny Wassus.

Across the episodes, there were 704 product shots, including over 300 iPhones, 120 MacBooks and 40 pairs of AirPods.

“I was struck by how heavy-handed some of the Apple products placement is,” Wassus notes in his video report. While Apple (and many others) have been using product placement in traditional TV programming for decades, “now that tech giants control their own streaming services, they’re able to subject TV lovers to a whole new type of product integration,” on their terms, he adds.

“Lasso” had the most placements, with 230 shots over 14 episodes, followed by “The Morning Show,” with 250 shots over 10 one-hour episodes.

While the other three shows had significantly fewer visual integrations, across all of the shows, these placements were most often positioned in the center area known to draw viewers’ primary attention.

Audio placements, including various types of references to Apple and phone ringtones, were also numerous. And iPhones, MacBooks and AirPods were employed as part of the storylines in most episodes — including use of Air Pods during 18 minutes of a 24-minute episode of “Mythic Quest.”

That tactic plays off the phenomenon of viewers developing “parasocial relationships” with characters, which can serve to transfer positive feelings about them to the products with which they are associated, observes Russell.

(PS: If you want to watch Wassus’s report on the WSJ site, for which most users pay hundreds of dollars per year, expect to watch a mandatory preroll ad.)