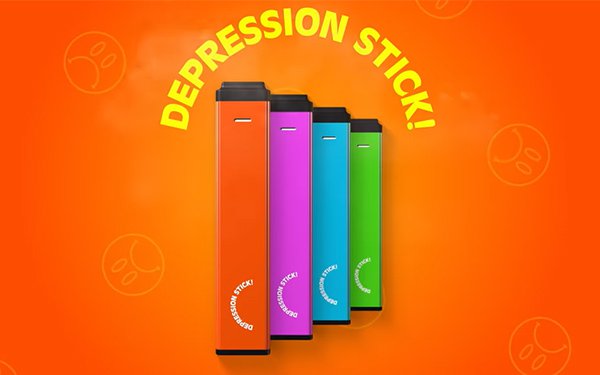 There’s a new vape product on the scene and it’s a real downer.

Depression Sticks are a new vape product that come just as research links vaping to amplified feelings of depression and anxiety. The introduction also follows last week’s decision by the FDA to postpone ruling on vape products.

Depression Sticks aren’t real—it’s a fake product invented by truth, the anti-tobacco initiative launched in 1998. The new initiative, via Mojo Supermarket, attempts to tell the truth about vaping while giving a “sales pitch.”

National ads boast fruity flavors like “Citrus Sadness” and “Dissapoint-mint” and boast that the vapes “Feel like anxiety,” but “Taste Like Cereal.” The ads drive viewers to Depressionstick.com.

One ad presents vaping as “Smooth, satisfying, depressing,” as upbeat music plays. The ad goes on to explain that Depression Sticks “can amplify feelings of depression and anxiety.”

The claim is based on research showing a link between vaping and depression. In particular, a 2019 study in JAMA Network Open found that e-cigarette users had higher odds of reporting a history of clinical diagnosis of depression compared with participants who never used e-cigarettes.

Later research has also shown that the incidence of anxiety symptoms in late June 2020 was three times as high as those reported in the second quarter of 2019. Depression was four times as high.