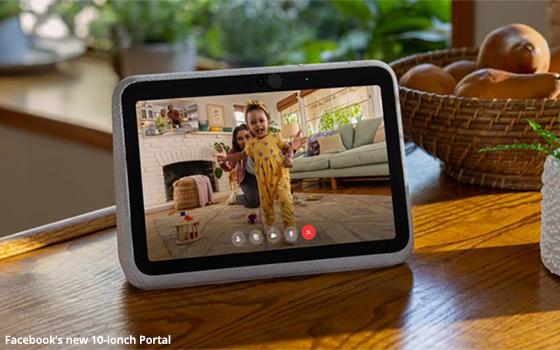 Facebook estimates it has spent more than $13 billion on “safety and security” since 2016 and has 40,000 people dedicated in this area to identify and reduce the spread of harmful and illicit content on its platforms with help from artificial intelligence (AI) technology.

“These teams reduce the spread of harmful and illicit content on our platforms and develop AI technology to remove millions of fake accounts each day,” Facebook wrote in a post published Tuesday.

The company makes these assertions as it begins to roll out consumer products -- smartwear glasses developed with Ray Ban and two devices it launched today: 10-inch Portal Go and updated Portal Plus.

Safety and security will become increasingly crucial to Facebook's reputation and the survival of its consumer products.

A week ago, The Wall Street Journal published several articles about how Facebook and its subsidiaries operate. The WSJ alleged Facebook knew of the serious problems from false COVID-19 information, to negative emotional effects on users but delayed fixing them.

Nick Clegg, vice president of global affairs, wrote a blog in rebuttal during the weekend that accuses the WSJ of “deliberate mischaracterizations of what we are trying to do, and conferred egregiously false motives to Facebook’s leadership and employees.”

Clegg called the WSJ’s allegations “plain false: that Facebook conducts research and then systematically and willfully ignores it if the findings are inconvenient for the company.”

Facebook admits engineers have not addressed address safety and security challenges early enough in the product development process, but rather made improvements reactively in response to a specific abuse.

That approach has now changed. Today there are teams focusing on safety and security issues directly into product development teams, allowing Facebook to address these issues during, not after, the product development process. Products also now go through an Integrity Review, similar to the Privacy Review process, so the company can anticipate potential abuses and build in ways to mitigate them.

The new focus moves Facebook from being a reactive to proactive company. In the past it took steps after the fact, not prior. Even with all the technology that can predict trends, the company still has to work reactively to remove 20 million pieces of COVID-19 and vaccine misinformation.

“No one has a crystal ball, but we’ve built our teams and technology to look around corners and prepare for upcoming challenges,” according to Facebook. “We’ve changed not just what we build, but how we build it — innovating with integrity, right from the start.”