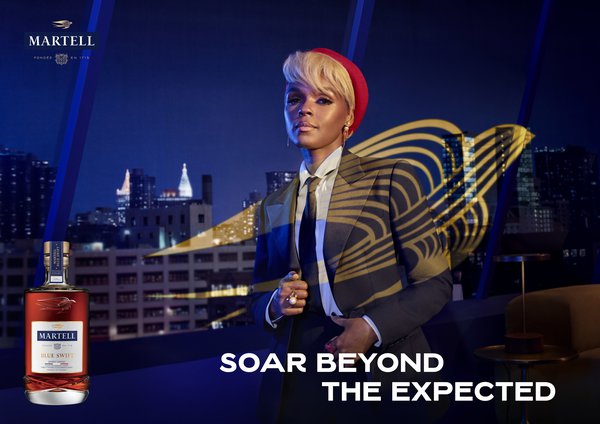 Martell has teamed with singer/actress Janelle Monáe for "Soar Beyond the Expected," a BBH USA-created campaign.

Martell has been sold in the U.S. since 1783, but the Monáe campaign is on behalf of a new brand, Blue Swift, said to be “the first-ever spirit drink made of cognac VSOP [Very Superior Old Pale] and finished in bourbon casks.”

Monáe is labelled a “Standout Swift”: “someone who defies convention and soars on her own unique wings,” according to Amani Duncan, president of BBH USA.

The campaign features a :30 spot on Martell-owned media, as well as a two-week paid burst on Hulu, YouTube and other video services that will also include :15 and :06 versions. Other elements of the campaign are display ads, with at least 50% of the budget planned for minority-owned media; three features on Vice Media sites covering Martell’s history, cocktail recipes, and a holiday gift guide; and a test of Pandora’s 3D audio technology for “an immersive and attention-grabbing experience.”

While Pernod might appear to be targeting young women for Martell Blue Swift, even going out of its way to point out this “women-led production” is “a rarity within a male dominated sector,” Martell told Marketing Daily  its key consumer and demographic target "has not shifted from previous years.…It is vital to create content that inspires consumers of all backgrounds to be unapologetically themselves.”

Louis XIII, meanwhile,  is going after younger “new audiences” in general with its new sweepstakes game, The Louis XIII Mysteries.

Connecting with new audiences is certainly not an easy task for a brand whose famed decanters cost hundreds of dollars apiece at the low end and that prides itself on the 100-year-old cognac contained in each.

In the game, players are tasked with finding hidden codes to answer 13 puzzles related to the brand and its history (hint: that history goes back to 1874). Those who solve all 13 puzzles will be eligible to win one of four prizes, each consisting of dinners for two and a cognac tasting in either New York, Los Angeles, Miami and Las Vegas. Since transportation won’t be provided, there’s also a “virtual tasting” option.

How hard is The Louis XIII Mysteries? This reporter easily found the first code embedded in an email received after registering for the promotion, but was left clueless on puzzle #2.

Created by French agency Numberly, the game will run on the Louis XIII website through Halloween, with the brand promising to unveil a second edition of the game, with new puzzles and prizes, towards the end of the year.

Finally, Courvoisier has turned its attention to small businesses and minority communities with the launch of Foundation 1828, a global philanthropy whose name pays homage to the brand’s founding date and which promises to “empower small business owners and entrepreneurs in underserved populations across the globe.”

The philanthropy’s initiatives include a five-year, $1 million commitment to aid Black and minority small-business owners and entrepreneurs in the U.S., and the continuation of a multiyear partnership with the National Urban League “to equip the Black business community with critical resources.”

On Thursday, in fact, Courvoisier will sponsor a National Urban League Conference virtual session during the organization’s Small Business Matters Entrepreneurship Day. Anyone (over 21) can attend the session -- and an accompanying “happy hour”  -- for free by registering with the Urban League. In return, they’ll also get a $5 discount code for Drizly delivery of Courvoisier VSOP.

Courvoisier said it will award $200,000 in monetary grants to Black entrepreneurs and small business owners during the conference.