The Mystery Of The Maskless Rider 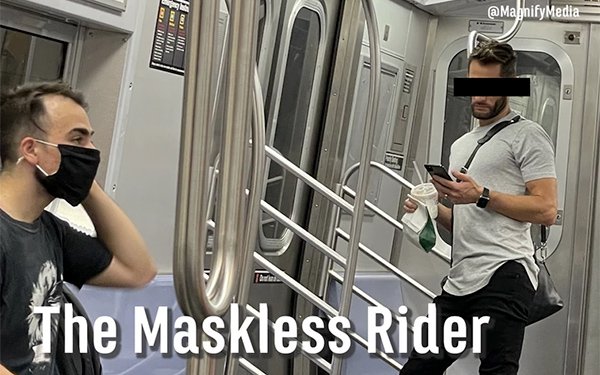 As New York begins to return to life, I’m finding myself doing something I once thought impossible. I’m riding the subway.

The NYC Subway is a unique combination of neighborly charm and vicious, competitive, sharp-elbow urban warfare. A ballet of humanity, with nothing that even remotely resembles social distancing.

But in the past few weeks, there has been a growing mystery that has me puzzled — the Mystery of the Maskless Man, and of course, Maskless Woman.

Mostly on the subway, people want to be anonymous. And our masks are something to hide behind.

But on each ride, I find there is one maskless rider in each car.

Some seem angry and belligerent — daring other riders to say something about their exposed nostrils. Others seem discouraged, just unable to follow the flock and mask up. And some, I presume, have breathing issues that make a mask impossible: emphysema or some other breathing ailment.

They look different, and I explore their demeanor, trying to find a clue.

Finally, I got brave and took a picture — the Maskless Man. I knew I wasn’t breaking any rules. We were in public, and it wasn’t my intention to shame him. But just snapping the picture was, in fact, a digital imposition. I posted him on Facebook, and the comments came rolling in. He was ’selfish’. He was ‘a Trumpster’; he was vaccine-hesitant. All may be true, but nothing is as it seems.

The pandemic has forced all of us to face our fears. Is the person coughing next to us dangerous? Is the maskless man willing to spread a deadly virus out of some unknown anti-social anger, or is he simply vain enough to believe that his beautiful nose, mouth, and jawline are too fantastic to be obscured with a flimsy piece of cloth?

Does the rise in maskless riders find its cause in the lack of enforcement? I haven’t seen a police officer on the subway in weeks, so maybe that means the mask rules aren’t being enforced. What about the angry maskless teen, or the maskless Hasidic rider, or the exhausted immigrant on her way to what must be her third job?

Perhaps most puzzling is the elderly man with the mask down around his neck. If you’ve got a mask, and it’s inches away from your nose and mouth, why not just pull it up? If not the subway for the proper mask environment, what are you waiting for?

So — here’s my message to Maskless Riders: “We are all uncomfortable. No one likes wearing them. And no one believes that they are magically immune or without risk. So unless the statement you’re trying to make is ‘I don’t care about anyone around me,’ then just get over whatever speech you’re telling yourself and mask up. We’re all in this together, and no amount of internal dialogue changes the fact that we’re all staring at you and wondering…why would a guy risk his life, and ours, over a bit of personal uncomfortable? And don’t say it’s about personal freedoms and liberties unless you’re going to drive your car without a seatbelt and zoom through every red light you see. Part of being in a civil society is we all obey rules, as trivial and annoying as they may seem.

cause-related, covid-19, health, new york, transportation
1 comment about "The Mystery Of The Maskless Rider".
Check to receive email when comments are posted.
Next story loading